A Devotion to St. Joseph 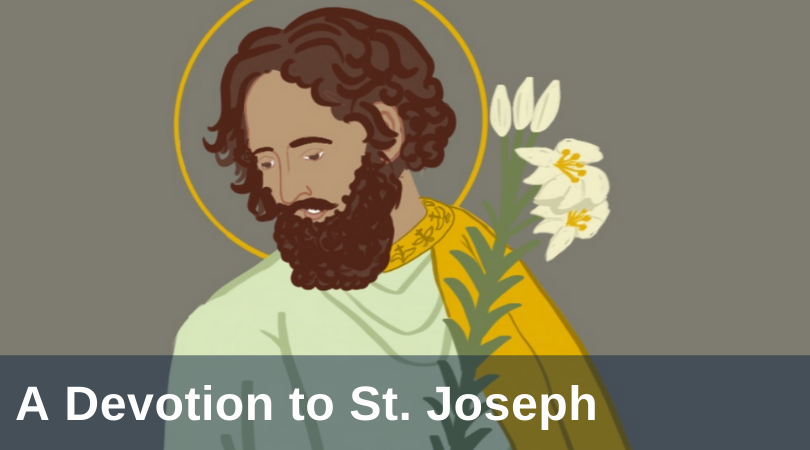 Editorial Note: This post is a part of our saint devotion series, in which one of our staff or faculty members explores their relationship with a particular saint.

St. Joseph is my favorite saint. He is my “best friend” among the saints, if the saints are our “friends.” I love him better than all the rest, and it’s OK, because, as St. Bernadette used to say, “there is no jealousy in Heaven.” But I cringe when someone asks me to write about him. I love St. Joseph so very much because his life is thoroughly “hid with Christ in God” (Colossians 3:3). He hides himself. We know him as someone who does not speak, who does not represent himself, who does not tell his own story, who gives up giving an account of himself. In this way, his life is a whole burnt offering, speaking to us only by not speaking.

He is the “father” of Jesus. Mary uses that word (Luke 2:48), publicly and without hesitation. Not the “foster father” or the “adoptive father,” but the “father.” Mary, in the Gospel of Luke, accepts the Incarnation as a free gift of conception by the Holy Spirit. Her use of the word “father” here is therefore pregnant with intention. It unveils the deepest of mysteries of love. How “father”? Joseph can’t tell us, because he would reveal the mystery of who Jesus was before His “hour” had come, and this mystery, Ignatius of Antioch tells us, was a secret kept from all eternity from the Prince of Darkness. And handed to Joseph for his safe-keeping.

Joseph may have resented being called “father.” After all, it is so commonplace. The most ordinary thing in the world. Joseph could protest! I’m not “ordinary.” Neither is this Little Guy, my Son, nor is this Woman, my Wife, ordinary. Let me tell you! I’m not the ordinary run-of-the-mill father who had sex like the least prepossessing dude among us who barely has any purchase on self-control and probably enjoyed it. I didn’t have the fun. I’m different! I’m “Joseph most just!” “Joseph most chaste!” “Joseph most valiant!” I’m special!

But Joseph does no such thing. His life is indeed hid with Christ deep in God, deep in the eternal silence of God’s secret counsel. He folds his identity completely into his Wife’s Son, as part of his abandonment to Divine Providence, which willed that the Incarnation happen not to a single unattached Virgin, but to one betrothed, and therefore to a married couple. Joseph’s fatherhood is given to him, and he receives his wife’s Son as his Son, as intended for his paternity and as completely defining his identity which he nevertheless cannot utter.

He completely surrenders his identity to a paternity that is not, in one way, his, but is willed by God for him and given to him. Joseph’s acceptance means utter silence, the complete inability to speak self-referentially, to give an account of the gift of which he was found worthy. In this secret of the greatest of intimacy, this secret, whispered to God outside of our hearing unlike Mary’s “Yes,” this almost embarrassing reception of paternity as a gift, instead of as an act the man can naturally claim—in this secret we have the deepest imaginable act of human paternal charity, turned toward the Christ-child with the utmost of masculine tenderness, solicitude, and renunciation. Just, “Hey kid, I’m your Dad!”

Joseph’s renunciation is so fully an act of love that it “covers” the Christ-child, and so also his Mother, from the view of the Evil One. It hides them from the Prince of Darkness, like a magic cloak of paternal invisibility. For the devil does not believe in Love. He can’t “see” through it. It looks like nothing to him, the Evil One, for whom the only reality is power, self-inflation, calculation, and prestige, all the elements of the “glamor” of evil and all its “empty promises.” St. Joseph “most valiant” protects his Son and his Son’s Mother by his gift of his whole self to them, first to her, as is the fundamental self-gift of a spouse, and then, in that self-gift, to him, the most adorable in the truest sense of the word. St. Joseph protects his Wife and Son purely, in advance of any action, by his paternity. It is because of Mary that the Word Incarnate is made “flesh,” but it is because of Joseph that he has an authentic childhood, sheltered from the intrusion of the world and the devil before his self-appointed and freely willed “hour” to, in turn, give himself fully. He does so after the pattern of his dad on earth, who formed him, humanly speaking, in the virtues and in fidelity to the Law, and ultimately and from all eternity, in obedience to his Father in Heaven.

See why I cringe when someone asks me to write about St. Joseph? Because he did not write, or even speak, about himself. And being his “friend’ means that that very friendship is hard to talk about. It takes on the character of Joseph himself, out of respect to him who is so embarrassingly loveable and Dad-like to anyone who would entrust themselves to him. And yet, one always likes to brag about one’s Dad. And so, I did!