At Notre-Dame de Paris, cross and altar survive. Is it a miracle? 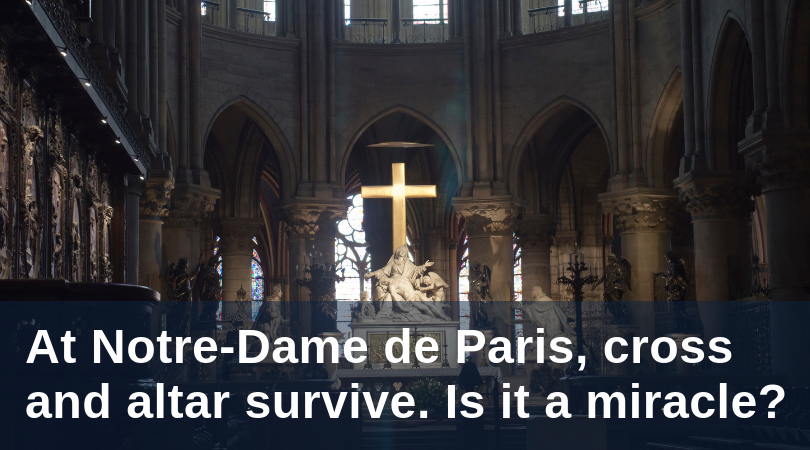 Looking at the pictures of the Cross of Christ, shining with the light of the morning sun, intact amidst the ashes and debris from the fire at Notre-Dame de Paris, I found them very moving. Is it a miracle that the cross and altar and candles survived? It depends on what you are willing to call a miracle.A miracle, in Catholic theology, is a wonder that is also a sign. For example, the miracle of the raising of Lazarus was certainly a wonder, that someone four days dead should be returned to life, but the wonder served as a sign pointing to Jesus, who is the Resurrection and the Life. The point is that if something so wondrous as the returning to life of someone four days dead is a SIGN, that of which it is a sign must be an even greater wonder, in this case, Jesus Himself, the Word Incarnate, whose total self-giving love is the greatest wonder of all.

People will argue about what constitutes a great enough wonder to be a "miracle"—a high bar would be that the event in question would have no known natural explanation, or, even higher, a violation of natural law. But people get very fixated, too fixated, on where the "bar" is set. In fact, something that strikes the beholder as wondrous, seen as a sign of something even more wondrous, such as the love of God, God's fidelity, his healing care, etc., is a miracle to the eyes of faith. God speaks through signs, and miracles are special signs of wonder designed to lift the mind and heart to God. They do not prove the faith, they invite faith and deepen faith, but they do not make it so faith can be left behind (as some people think). To the eyes of faith, not only this, but the whole world itself, is a miracle, a wonder that is a sign of God's love and of the power of his love.

For me, seeing that Cross and altar after such a ravaging devastation, I couldn't help but see it as a sign. The Cross is itself a sign of Christ's victory over sin and death, and here was the image of that sign, wondrously present after a merciless fire, and for me it was a sign of hope in the only ultimate hope we are given, the self-giving love of Christ in which we have a victory not only over a fire, but over death and sin itself.