Behind the Scenes: Stories in Light 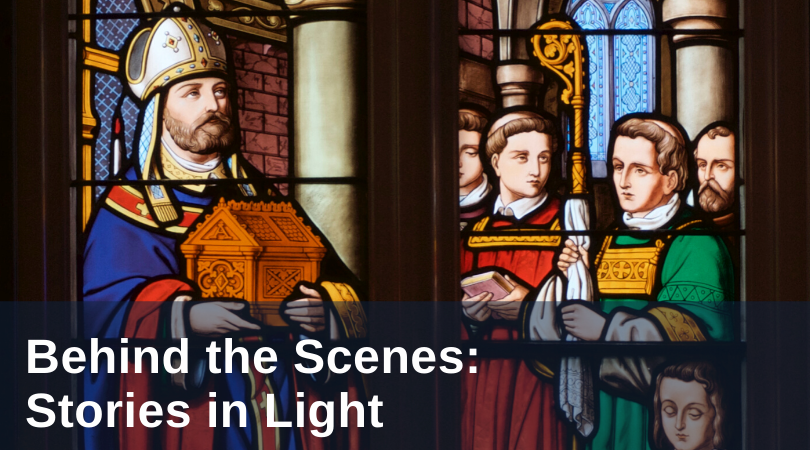 I was recently asked what it was like doing the research for a book I co-authored about the stained glass windows at Notre Dame’s Basilica of the Sacred Heart. The words of the Tin Man from The Wizard of Oz immediately popped into my head. “A while back, we were walking down the yellow brick road…” Researching and writing the book had its share of unexpected tornados, witches, even flying monkeys, and sometimes the yellow brick road just fell off into nowhere!

My adventure with the relics of St. Eutropius might illustrate what I mean. Eutropius is portrayed in the stained glass of the Basilica’s Relic Chapel. These windows, installed in 1884, were a response to the sustained critique of the cult of relics and their destruction lasting from the Reformation, through the Wars of Religion, to the French Revolution. 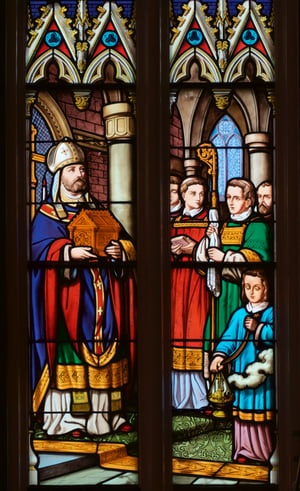 The six scenes found in the three windows of the Relic Chapel are illustrations of the “invention” (the “discovery”) and the “translation” of relics (moving them from one place to another). They feature St. Martin of Tours, St. Stephen the Proto-martyr, St. Nicholas of Myra, Jesus’ Crown of Thorns, an otherwise undesignated “saint,” and St. Eutropius, a founding bishop in Roman Gaul martyred by an ax blow to his head, thus leaving an easily recognizable relic. But the scene of “a saint”—otherwise undesignated though placed among the other five whose identity was obvious—was jarring. Certainly, this scene was as important as the other five, but it had lost its voice! No saint’s name is inscribed on the reliquary depicted, unlike the other five scenes. On the reliquary’s peak was the Greek letter Alpha; the Omega was on its other side, referring to Revelation 1:8 (“I am the Alpha and the Omega”). My yellow brick road fell off into nowhere! I decided to keep walking, proceeding with my research, hoping the road would reappear and the scene would eventually make sense.

Moving from “a saint,” the fifth scene, to St. Eutropius, the sixth scene, I fortunately found an old and obscure book by Louis Audiat (1832–1903), a librarian and historian who published, among his many books, the historical records and verbal processes of the relics of Eutropius. This 1877 book, Saint Eutrope et son prieuré, documents inédits, definitely was unedited, running to 538 pages. Among its documents was an account of Eutropius’ relics being carried on the 75-mile liturgical “translation” procession in 1602 that returned Eutropius’ cleft skull from Bordeaux, where it had been sent for safe keeping during the Wars of Religion. It suddenly occurred to me that the 1602 translation perfectly described the window scene of “a saint”—I realized that the scene was intended as a companion to the Eutropius scene. Together they illustrated the survival of Eutropius’ relics despite the desecrations of the Wars of Religion and the French Revolution. 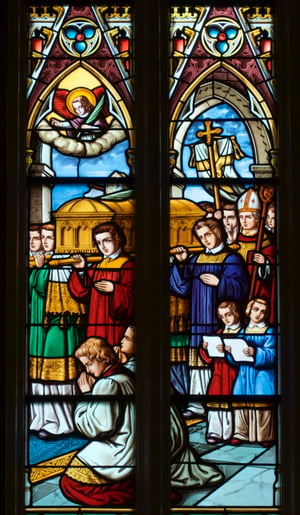 Audiat’s publication of documents extended through the French Revolution, recounting the brave laity who hid Eutropius’ skull to preserve it from destruction. The documents recorded the names of the two laymen who would have been executed if they were found with the relics. Finding their names was a precious discovery and I give them to you now: Jean Doussin and François Grout.

Eutropius’ skull was eventually placed back in the Church of St. Eutropius when it was deemed safe. The excavation of the historic Romanesque crypt of that church uncovered his tomb and further relics, which had been hidden under rubble since the Wars of Religion. These additional relics were placed, with his skull, in a large reliquary case and liturgically translated to the crypt of the Church of St. Eutropius in 1843.

There is no doubt that the late nineteenth-century visitors to the Basilica’s Relic Chapel would have recognized both of the Eutropius windows and seen in them the enduring place of the Catholic veneration of relics corresponding to Fr. Sorin’s intention to bring to life, in light, such Catholic devotions and their meaning. Visitors then and now can still venerate the relic of St. Eutropius, given to Fr. Sorin by Bishop Villacourt of La Rochelle, France. Bishop Villacourt is honored in the second Eutropius window, depicted translating the saint’s relics in 1843.

Read more about the stained glass windows in Notre Dame’s Basilica of the Sacred Heart in Stories in Light: A Guide Book to the Stained Glass Windows of the Basilica at the University of Notre Dame.

All images by Nancy Cavadini and Cecilia Davis Cunningham; used with permission.