Co-Responsibility: Cultivating Hope in the Face of Disappointment 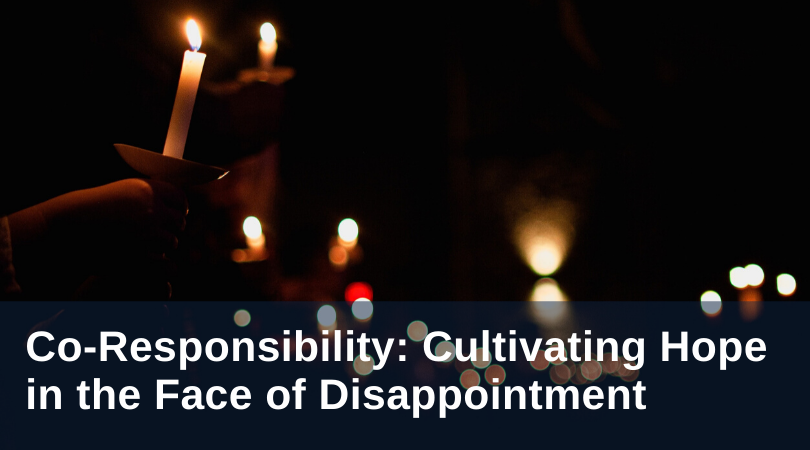 If you are like me, the news of Jean Vanier’s abuse and manipulation of six women receiving spiritual direction was a gut-wrenching combination of disappointment, disillusionment, and disgust.

In the face of seemingly endless iterations of scandal in the Church, there was at least Jean Vanier. He was one of the beacons of hope and renewal and reform, a layman who had succeeded in creating, in L’Arche, a new form of communion and evangelization. A real lay leader in the Church. Someone whom we thought of as a harbinger of the ideals of “co-responsibility for the being and acting of the Church,” to use Pope Benedict’s words.

Here was hope for a new vision of leadership in the Church. But even this hope was dashed. Back to the drawing board. Find another beacon of hope and harbinger of renewal. But we’re running out! I thought. Where do we go from here?

But not so fast. Disappointment, disillusionment, and disgust, OK, but despair, No, and Never. L’Arche exists and is flourishing. L’Arche continues to inspire new leadership in the Church, both among the baptized, lay, and religious, and among the ordained. New examples of “co-responsibility” are emerging within this great movement, a true movement of the Spirit, of evangelizing communio, in our time. The worst scandal would be to allow the failings of the founder, however grave, to taint the movement that is now populated by so many persons of good will, of servant leaders, bound together in charity and mutual growth in witness to human dignity.

Why are we surprised when leaders are flawed, even gravely flawed? Neither Baptism nor Holy Orders comes with a guarantee of the eventual personal holiness of the one baptized or ordained. The mystery of freedom allows the subversion of even sacramental grace. Yes, it is disturbing and profoundly disillusioning to discover that someone we thought was a saint, was far from it. But it does not nullify the fruits, for these are not the fruits of Vanier’s supposed sanctity, but of his leadership—namely, L’Arche. To think that disillusionment over his supposed sanctity does nullify the fruits of his leadership smacks, perhaps, of clericalism, as though the leadership of the clergy, however marred by sexual abuse and contempt of the lay faithful, is allowed its fruit, while the fruits of the leadership of a lay man is completely effaced and negated by his sin.

St. Augustine taught long ago that the Church, though truly the presence in this world of the City of God, was nevertheless its mixed presence as a “corpus permixtum,” a “thoroughly mixed body” of saints and sinners. Disturbing thing: the “mix” is not only external, but it passes through each and every member apart from the Mother of God, the eschatological icon of the Church. The wonder is that God does not disdain to work through such a “mixture,” through such “mixed” vessels, earthen vessels, subject to failures of judgment, and all too often yielding to temptation to the point of sin in the abuse of spiritual influence. God doesn’t say, let me go back to Heaven, no harm no foul, these people are too dirty for me, I can’t get too involved or I will be tainted. The thing about true divine love: nothing can taint it. And thus it is so powerful that it can bring good out of evil, famously, as the CCC says, without making the evil a good (CCC §312). God’s work cannot be stopped by personal evil, but even brings good out of it, and only God can do that, for only God’s love is profound and pure enough. Once we get over the cult of personality, which is easy to substitute for admiration for true sanctity, we can start seeing all good that God has accomplished through the flawed leadership of Vanier. Once we stop thinking of him as the last beacon of hope, we see the beacons of hope to which the cult of the one personality can blind us. L’Arche is full of beacons, little and big, of light, hope, good example, charity, and love, all of the fruits of the Spirit.

It is actually a little moment of good old fashioned mortification to stop allowing oneself the pleasures of the cult of personality, as though holiness were fixed to this one person, and not to the many who, without recognition, living the “hidden life,” are the leaders of this work now. If we stop pinning the idea of “co-responsibility” on one man, ordained or not, on one person, on one figure, all of whom are flawed, and begin to see how it is carried by the vanguard of leaders in evangelization day in and day out, the lay members supported by the sacramental leadership of their clergy, we will see the reality of the People of God on pilgrimage from where we “have no abiding city” to the “city which is to come” (Hebrews 13:14). We will in this vision have a true vision of hope. Continually placing our hope in a flawed leader and his supposed personal holiness, we won’t be able to resist clericalism, which gets “stuck” on a person, lay or ordained, as though in him or her we were “home” already and our pilgrimage over. In so doing, aren’t we resisting our own call to conversion, to humility, to action, and yes, to leadership? We will always be chasing illusions instead of seeing what is “hidden,” the co-responsible partnerships in the Spirit which are so easily overlooked because we are focused on the all too visible realities of personality and status. But the “Spirit and the Bride say, ‘Come!’” and keep us moving. “Amen, Come, Lord Jesus!” (Revelation 22:17, 20).