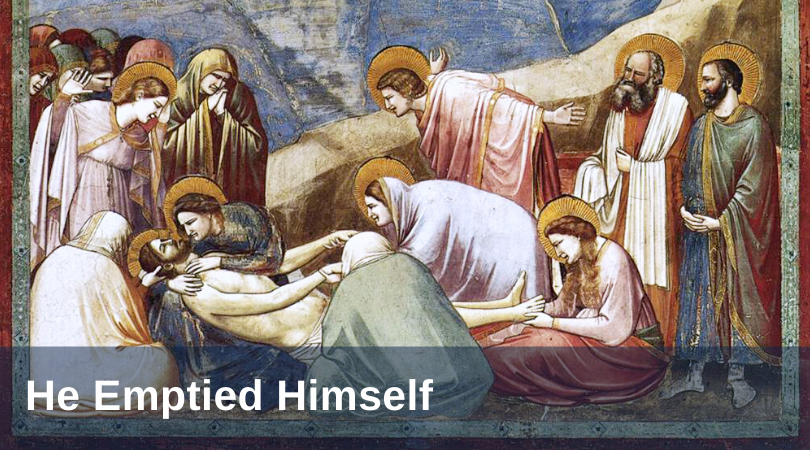 Editorial Note: This post was originally delivered as a reflection for Palm Sunday on Sunday, April 5, 2020.

“He emptied Himself,” Paul tells us in the second reading from Philippians (2:7). Who “emptied Himself?” “Christ Jesus,” Paul says, “though he was in the form of God.” The Creed explains what this means: in other words, “though He was in the form of God” because he was the “Son of God, God from God, Light from Light, True God from True God, begotten not made, consubstantial with the Father,”—“Christ Jesus” in the “form of God” is that one the Creed speaks of, truly God from all eternity in the permanent bliss and blessedness that belongs to God the Trinity as an eternal exchange of the most intimate love.

When Paul tells us that “Christ Jesus,” eternally begotten of the Father before all ages (again in the words of the Creed) “emptied himself, taking the form of a slave, coming in human likeness; and found human in appearance, he humbled himself, becoming obedient to the point of death, even death on a cross”—when Paul tells us this, we can hear the words of an ancient Council summing it up: “One of the Trinity was crucified.”

“One of the Trinity” “emptied himself,” bending all the way down from the eternal blessedness of the unspeakably intimate and changeless life of love of the Holy Trinity, to live a truly human life—and not even in the unfallen condition of Adam as he was created, but he bent ALL the way down to human life as we know it—subject to all the frailty, all the disappointments, the dashed hopes, forsaken ideals, mocking and contempt, deeply ingrained injustice, subject to betrayal, desolation and abandonment—abandonment even by God, “My God, my God, why have you forsaken me?”

The depth of the mystery of our faith! God, one of the Trinity, tastes, because he willed to, because “he emptied himself,” all of the bitterness of human misery under sin just like us, “in the form of a slave,” no special privileges, no parades with banners declaring to all admirers, “One of the Trinity!” “Son of God!” “Begotten from All Eternity!” with all of the horrible ostentation with which we are all too familiar from those who use their status to dazzle, and then to crush, others. No parade here. “Morning after morning he opens my ear that I may hear, and I have not rebelled, have not turned back. I gave my back to those who beat me, my cheeks to those who plucked my beard; my face I did not shield from buffets and spitting,” “becoming obedient even to the point of death.”

For he really came to share our life as we know it, as “slaves” to sin, yet he had not sinned. Still he came, and utterly devoid of contempt, threw his lot in with ours, in solidarity with sinners, with the lawless, with the ugly and the coarse and the addicted, addicted to injustice as we all on various levels are. He didn’t care. He didn’t care even enough to hang onto the status of being sinless, though never sinning. He jumped right into the Jordan with all the despicable tax collectors. One of the Trinity allowed himself to be counted among sinners and he never backed out or backed down. He refused to break that solidarity into which “he emptied himself.” He refused to come down from the Cross. I know that if had had the power, I would have! But he accepted the God-forsaken-ness, the seeming emptiness, the humiliation, the loneliness, the desolation of death.

And refusing to break fellowship even in death, the penalty for sin, mixing himself with sinners, reaching out his hand, and as though he were a sinner “becoming obedient to the point of death,” having persisted in solidarity with us to that point, he remakes all of human solidarity as a solidarity in that love that “emptied” itself. God, True God from True God, really joined us. It wasn’t a fake or a show. “Light from Light,” eternally blessed from before all ages, really entered into fellowship with us in our self-created darkness, and gave away the only life he had, fully and holding nothing back, without having to. And now we have fellowship with him and with each other in this Love, which did not back out or back down and never has and never will.

What we discover is that that Love is true life, eternal life, a share in the life of the Trinity, which not only cannot be destroyed, but rises again transfiguring everything. Even now, when we say at the point of greatest desolation in our lives, “My God, my God, why have you forsaken me,” we do not say it alone. For we know, we believe, “One of the Trinity” “emptied himself,” out of love, so far down, all the way, to the point where he himself out of desolation said it. He said it with us and for us. Even in our desolation, he grants us a share in that life of which he is “Lord,” “Lord” of self-giving love, the “name which is above every name, that at the name of Jesus every knee should bend, of those in heaven and on earth and under the earth, and every tongue confess that Jesus Christ is Lord!”—not as to someone with a banner in a parade, but in awe at his gift of love, and in gratitude, renewed in every Eucharist, as we have celebrated today.