Holy Orders and the Virtue of Prudence 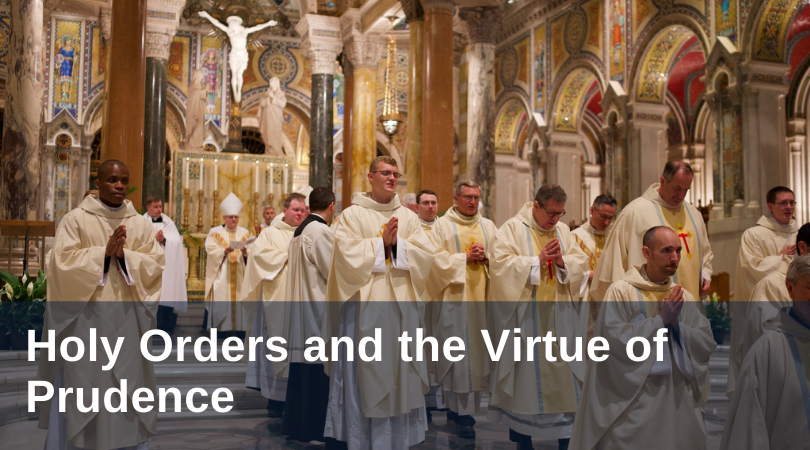 We frequently focus on Mary’s fiat, her courage to say ‘yes’ to God, using her example as inspiration to surrender to God’s plans, even when we cannot fully comprehend them. However, we often forget to examine the fiat of the man to whom she was betrothed.

Joseph, a man of honor and integrity, discovers that his wife is expecting a child that is not his. Is he actually to believe that this conception is divine? I imagine he, like Mary, must have asked ‘How can this be?’ Living in a culture where the punishment for adultery is shame, exile, potentially even death, Joseph’s plan to quietly divorce his betrothed is a countercultural act of charity and prudence, an indicator of his respect for the dignity of life, his desire to do good and avoid evil. However, in a dream, an angel appears to Joseph and tells him “Joseph, son of David, do not be afraid to take Mary your wife into your home. For it is through the holy Spirit that this child has been conceived in her. She will bear a son and you are to name him Jesus, because he will save his people from their sins” (Matthew 1:20–21). Awaking from his dream, Joseph exemplifies the virtue of prudence. He discerns the good and responds accordingly: “he did as the angel of the Lord had commanded him” (Matthew 1:24).

St. Joseph is a model for all of us; indeed, that is largely why Pope Francis has dedicated this year to this holy man, that we might “implore his intercession and to imitate his virtues and his zeal” (Patris Corde, 7). But even more so, St. Joseph is a model for priests. His fatherhood, which was strictly spiritual, is rooted in virtue, particularly that of prudence, a virtue that is demonstrated through the sacrament of Holy Orders.

Rather than entailing overly cautious behavior or deliberation at great length before making a decision (had Joseph done that, he would never have taken his family to Egypt in time to escape Herod), prudence is about action. St. Augustine affirms, “Prudence is the knowledge of what to seek and what to avoid,” and St. Thomas Aquinas sheds further light on Augustine’s assertion, describing prudence as “right reason in action” (Summa Theologica II-II,47,2). Of course, that knowledge and reason is rooted in the knowledge and reasoning of God.

Holy Orders is “the sacrament through which the mission entrusted by Christ to his apostles continues to be exercised in the Church until the end of time” (CCC, §1536). Men who are called to this vocation are to be a living image of the Father. Like St. Joseph, they must be willing to obey God, discern good from evil, “guide and defend his Church with strength and prudence as a father and pastor” (CCC, §1586), to counsel their flock, to lead others closer to the heart of Christ. In a homily during a Mass for the ordination of five new bishops, Pope Benedict XVI noted that one of the characteristics Jesus asks of his priests is prudence, stating, “Prudence demands humble, disciplined and watchful reason that does not let itself be blinded by prejudices; it does not judge according to desires and passions but rather seeks the truth, even though it may prove uncomfortable. Prudence means searching for the truth and acting in conformity with it.”

The sacrament of Holy Orders is one to which only few are called and even fewer are chosen. As a woman, it is the one sacrament to which I relate least. But does that mean this sacrament is irrelevant to my life? No. I have been the recipient of the graces that come from men whose priesthood is rooted in the examples of Christ and St. Joseph—men who are good, holy, courageous, prudent, who embody the sacrificial love of God, who have acted as a spiritual father to me and to many. By witnessing the way in which they embrace their vocation, I am reminded of how, by virtue of my Baptism, I am also called to participate in the royal priesthood of Christ, to share in his prophetic mission (CCC, §1268). While I will never receive the sacrament of Holy Orders, I, too, am called to be an icon of Christ to all I encounter. Thus, the virtue of prudence must be fostered and nurtured within my heart as well, so that I may search for Truth and act accordingly.