Lecturing to an Empty Classroom 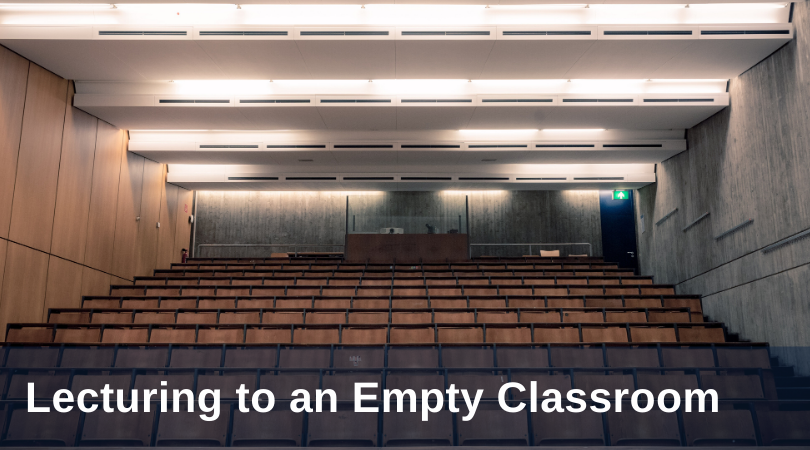 Classes resumed at the University of Notre Dame after the conclusion of an extended Spring Break. My large lecture class, 230 students strong, called “The Catholic Faith,” resumed with the rest of our classes. I showed up to my usual classroom at the usual class time with my usual feeling of nervousness before teaching. I prepared the blackboard as usual, with the topic for the day, “The Descent into Hell, The Resurrection, and the Ascension of the Lord.” Our class is based on the Apostles’ Creed. We have reached the end of the second article. I put on the screen an image of the two classical icons of the Resurrection, the one of Christ descending into Hell and liberating Adam and Eve from the kingdom of the dead, and the one of the Spice-Bearing Women, come, as they thought, to anoint the body of the Lord. At the appointed moment, I started my lecture.

Only one thing was not as per usual. The classroom, a large amphitheater-style lecture hall, was empty. Eerily and uncannily empty, with no other living soul present. Not one student. The green light that signals the lecture was being automatically recorded turned on. Even that seemed eerie and impersonal, with no one present, seemingly, to supervise the recording. It’s hard to explain how this feels. I’m used to the feeling of a living relationship with the presence of a living community when I teach. A two-way street. I do lecture, but as I go along I take questions and respond. I ask questions, too, as I go along, so students can contribute in some way to the lecture. I’m used to the presence of so many young people, most of them eager to learn and ready to give the benefit of the doubt to the sometimes boring, sometimes flustered, at all times imperfectly clear baby boomer, ponderously booming across the generations. Almost never do I even see a student falling asleep. It’s a gift of attentiveness and of patience and I am grateful for it!

Only this time there were just the rows of empty student seats staring blankly into space, indifferent and impersonal. The classroom has a steep incline, much steeper than the classical amphitheaters of ancient Greece. Not that I’m any Sophocles. Far from it. But I seemed to be lecturing to a cliff face of remote disinterest, an absence and not a presence.

But I lectured on. Lectured on the Resurrection of the Lord, in advance of our celebration of Easter. Though there were many eyewitnesses of the appearances of the Risen Jesus as narrated by the Gospels and St. Paul, there were no eyewitnesses of the Resurrection itself. “O truly blessed Night which alone deserved to know the time and the hour when Christ rose from the realm of the dead!” So goes the awesome and solemn proclamation of the Resurrection, the Exsultet of the Easter Vigil. There was no audience for this wholly intimate event of divine love, planned in the heart of the Trinity from all eternity and now realized, almost as a secret Spousal transaction, here in the garden at night, at the dawn of the New Creation.

The traditional icons of the Resurrection respect this holy silence of the Gospels. They evoke the mystery of the Resurrection by depicting other biblically suggested scenes: the descent into hell (1 Peter 4:6), and the women who arrive at dawn. The scene is a composite from the Gospels. Mark 16:1 names three women: Mary Magdalene, Mary the mother of James, and Salome. In the version of the icon I use for class, the trio of women is arranged triangularly, suggesting, intimating, in their communion of will and purpose, the Holy Trinity. They’ve arrived at the tomb. They are greeted by two angels, each, solemnly joyful, stationed at one end of the tomb, on which we see the burial clothes of Jesus, neatly laid out on top like a washed and ironed tablecloth, so exquisite is the placement. The head cloth, as the Gospel of John suggests, is very decorously detached and spaced apart, as though each millimeter were measured to achieve the desired effect, an indication of purpose. The grave cloths signify that the tomb was empty, but mysteriously so, not by violence either of grave robbers or of misguided artistic imagination that would have the Resurrection be a terrifying event shaming the sleepy grave guard, but by some mighty act of gentleness done according to a purposeful plan. 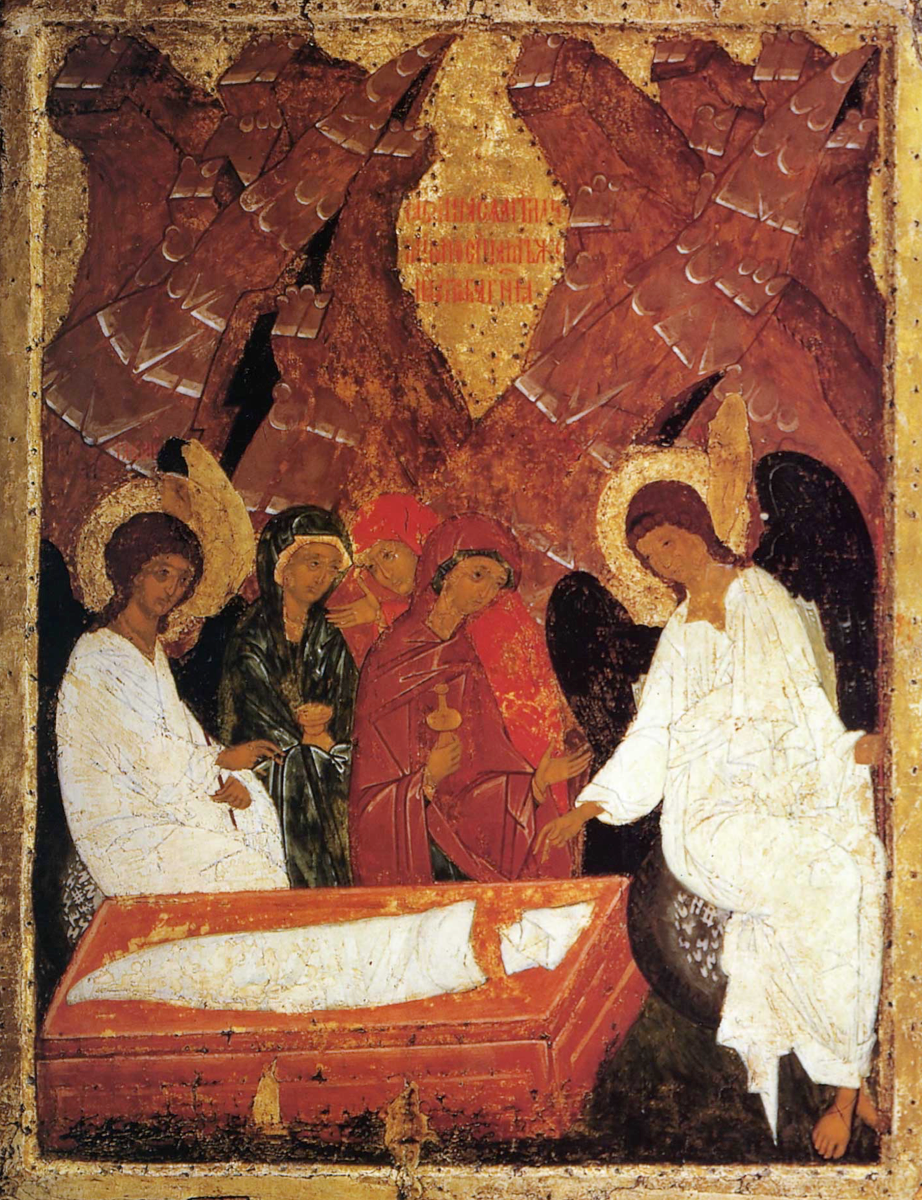 The two angels on either side . . . hmmm . . . where have I ‘seen’ them before—yes: “And Moses made the mercy seat of pure gold, . . . and he made two cherubim of gold, beaten out of one piece he made them, on the two ends of the mercy seat” (Exodus 37:6–7). The mercy seat, the cover of the Ark! The heart of the presence of God in the tabernacle, whose design was revealed to Moses with meticulous care, just like that shown by the grave cloths. The empty tomb—the icon is saying—is an absence which is paradoxically a presence. Here in this event of the Resurrection of the whole humanity of Christ, his body included, is absent, transfigured by divine glory according to the eternal plan of the Trinity—here present, as the icon suggests—is the mercy of God’s presence to humanity, spoken from eternity, long prepared and now come to fulfillment, fully transacted on our behalf. This mercy is fully present in this absence.

I thought of the empty room (it happens to rhyme with empty tomb!). An absence that is a presence. Reflecting on the icon, I saw the empty room differently. In this absence, all of the students were, paradoxically, present. They would view the lecture later. Our little classroom community would not be broken by distance after all. In some way, by our mutual commitment, the absence manifested the presence even more. The victory of Christ establishes our communion in his absence-which-is-a-presence. This communion is unbroken by death and everything associated with it, including plague or pandemic and the fear they can induce. It was a small moment, but, I think, a true anticipation of the joy and hope that Easter brings, whether we will able to assemble this year in person, or only in the hope of reassembling in person, both now in history, and, wholly transfigured, in the eternity of God’s meticulous providence.