Liturgy and Education, Part 1: Why They Need Each Other 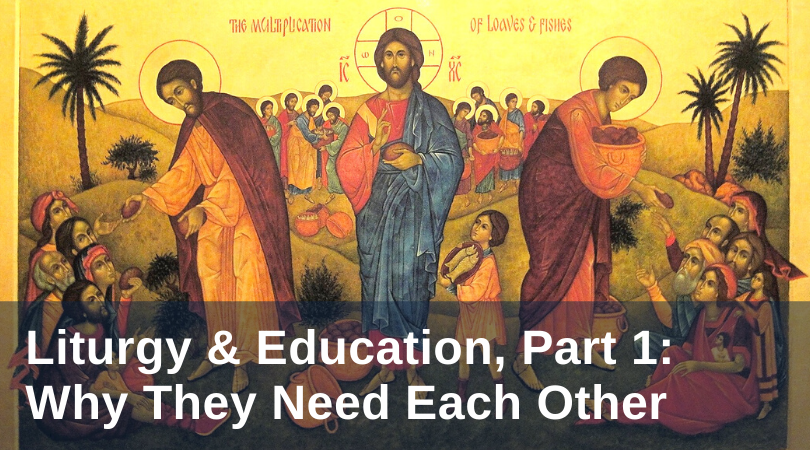 In usual conversation, the term “education” is most often used to refer to the process of formalized schooling. Schools are where education takes place, and for this reason, education is understood as the project of a young person who completes this education upon conferral of a degree or certification. One may begin, as my undergraduates say, “to adult” upon graduation.

Yet, this account of education is insufficient. Education comes from the Latin word educō. In translation, it has several meanings. Literally, it means to lead out from (ex-ducō). Imagine that you are in a cave, immersed in total darkness. From outside the cave, you hear a voice. The anonymous voice serves as your “educator,” leading you out from the darkness into the light.

Educō has another connotation. It may also mean to raise or build something up, or even to produce something like a crop. This meaning is tied most directly to our commonsense use of the term education. Children are raised up through a process of cultivation and nourishment. And therefore, education is that process by which the full potential of the child is realized; the child is nourished in his or her humanity.

For this reason, education is not exclusively the task of the school. How could it be? Schools are not even the original space where this cultivation unfolds. The child is born first into a family, nourished with milk, with human touch, and with sights and sounds that arrest her attention. The child is educated into the use of his body, as well as a broader culture within the context of the family.

Thus, education strives to do more than the school alone can do. Education is, as the Catholic philosopher Jacques Maritain argues, the process by which the child learns to be fully human. And the task of education is a social task that involves the family, society, friends, the school, and the parish. Insofar as the cultivation of this humanity is a lifelong task, education does not end with the completion of a degree or training program.

A broader understanding of the meaning of education must come with a critical awareness of the very real possibility of miseducation. Children in the home may learn from adults that near-perpetual engagement with screens is part of being fully human. American culture, and the schools that initiate students into this culture, may propose a vision of the human person merely as consumer and producer. The parish may initiate families into a Christianity that eliminates its prophetic edge, a suburbanized Catholicism that speaks more of self-improvement than the shattering events of the life, Death, and Resurrection of Jesus Christ.

This brings us close to the theme of this series. What specifically makes an education Catholic?

Catholic education initiates men and women into a peculiarly Catholic way of understanding human flourishing. What makes this education peculiar is the telos or end of this education. The human person, as Catholicism proposes, is made for beatitude, for that happiness that comes with seeing God face-to-face.

In other words, Catholicism sees women and men as possessing an intrinsically liturgical vocation. We are not first and foremost producers and consumers, but those made for contemplative adoration of the God who is truth, beauty, goodness, and love. The human person is made to worship God.

There is more to say on this theme. And I’ll say it over the next nine weeks. But enough has been proposed to introduce the theme of this series. Liturgy and education need one another because the human person is made for contemplative adoration of God. If one is to become an adorer of God, then one will need to cultivate those dispositions necessary for worship. The family, the school, and the parish all have a role in this education.

Furthermore, a Catholic education in the family, the school, and the parish will be liturgical. Without this liturgical orientation, it’s just as likely that a miseducation will take place, one dominated by a skewed vision of human flourishing that makes happiness impossible.