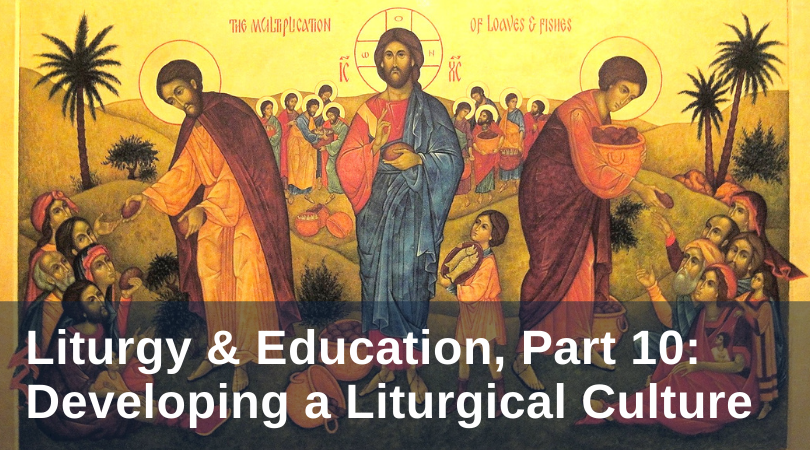 One of the problems with liturgy is that it is often treated exclusively as an intramural activity of the Church. That is, liturgical education is about making sure that we ‘say the black’ (the words) and ‘do the red’ (the rubrics). Studying the liturgy, then, is basically learning to read the cookbook. Lay folk have their parts in this cookbook, and therefore, the Catholic school, family, and parish must teach these parts.

This means that liturgy becomes entirely a “churchy” thing, unrelated to the rest of life. However, this is a poor understanding of the liturgy. Liturgy has to do with culture—the way that we live our lives in the world. Liturgical culture means that liturgy “informs” what it means to be human in the context of the school, the family, and the parish.

And yet, we must acknowledge that there are aspects of culture that are antithetical to liturgical celebration. That is, if the liturgy is to be educative, we will need to attend to spaces where culture must be healed. In other words, we must find a way to create a culture that is cultic.

What are ways in which liturgy must heal culture? In this short post, I want to focus on but three, each raised by Pope Francis.

1. Liturgy must heal a technocratic paradigm.

What does the term “technocratic paradigm” mean? In his encyclical Laudato Si’, Pope Francis writes:

This paradigm exalts the concept of a subject who, using logical and rational procedures, progressively approaches and gains control over an external object. This subject makes every effort to establish the scientific and experimental method, which in itself is already a technique of possession, mastery, and transformation. It is as if the subject were to find itself in the presence of something formless, completely open to manipulation. (§106)

The technocratic paradigm means that we approach the world and other human beings exclusively for the sake of manipulation. We create our own world, receiving nothing as gift.

This paradigm can infuse parish, school, and family life. A parish that focuses more on strategic plans and forming committees, attending less often to the kerygma, suffers from this technocratic paradigm. So does the family that involves itself exclusively in frenetic activity and the school that worships solely at the altar of STEM education.

Adoration of technology often provides the greatest evidence of a community that has succumbed to this paradigm. One is not going to attract more Catholics because your parish puts up a screen at the front of the church and plays hip videos from parish staff. Nor for that matter is the Catholic school going to stem the tide of declining enrollment by making sure that every student has a laptop to take home. Technological innovation cannot solve everything.

2. Liturgy must heal the tribalism endemic in American life today.

Pope Francis addresses this tribalism in his encyclical, Fratelli Tutti. He writes:

Our own days, however, seem to be showing signs of a certain regression. Ancient conflicts thought long buried are breaking out anew, while instances of a myopic, extremist, resentful and aggressive nationalism are on the rise. In some countries, a concept of popular and national unity influenced by various ideologies is creating new forms of selfishness and a loss of the social sense under the guise of defending national interests. (§11)

These ancient conflicts, of course, are mediated in American life through the very social networks that were supposed to bring us together. We do not even hate and condemn the neighbor who supports a different political party on Facebook or Twitter. Rather, we erect echo chambers where the only people we encounter are those who think and act like we do. The “other” is excluded, thrown outside the community.

In parishes, this means that we fracture the Body of Christ in our midst. Niche parishes, focusing on high liturgy or social justice, are evidence of this fracture. The Church proclaims that all humanity is called together to be saved, to evangelize their little corner of the universe. And yet, the parish focuses inward, no longer seeing its mission as infusing the world with Eucharistic life. The family, in this case, becomes a consumer of a spirituality that resonates with them, rather than receiving a holistic Catholic formation.

Schools, too, suffer from this tribalism. I have often been to a Catholic school in which the president or principal wishes that the school could function as the “parish” for the students. And yet that approach creates yet another bubble of often well-educated, attractive, upwardly mobile student-parishioners who do not learn to love the concrete Church that exists in their neighborhood.

3. Liturgy must heal a culture of forgetfulness.

Throughout his pontificate, Pope Francis has noted that globalization and a certain version of capitalism makes us forgetful. We are constantly interested in what is novel. We believe that we are creating a culture that transcends all particularities, a culture grounded in the economy rather than in traditional forms of life, yet a culture without memory has no wisdom to mark time, to deal with suffering, or to handle a global pandemic.

In the next and final post, we will see how a liturgical culture has to create an alternative way of being human, one that may change what it means to educate in the family, the school, and the parish.