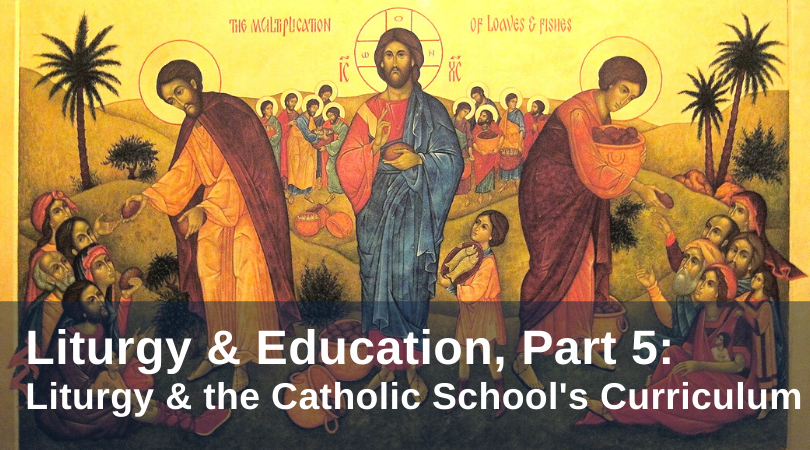 Thus far, this series has focused on the educational qualities possessed by liturgical prayer celebrated in the school, the parish, and the family. Liturgy is educational insofar as it forms us to see human life as ordered toward the adoration of God. If we are attentive to liturgy’s pedagogy, then we may learn what it means to be fully human.

For this reason, the liturgical orientation of Catholic education has implications beyond the celebration of the liturgy proper. Liturgy should change the way that we educate, shaping even the curriculum of a school.

Liturgy often functions as a measurement of the Catholic identity of a school: because the liturgy is celebrated with some regularity, the school is seen as Catholic. But there is a danger in treating Catholic identity exclusively as devotional. Catholic life is reserved for the context of prayer, allowing the classroom to function as it would in any other school in the United States.

Now don’t get me wrong. Catholic classrooms can be influenced by regular celebrations of the liturgy. Teachers may begin class with prayer drawn from the liturgical year. There may be a spirit of hospitality, of communion, that binds the teacher and the students together.

But the onus of a school day is dedicated to the curriculum. Students go to school to learn. And if the curriculum and the school’s pedagogy are not influenced by the liturgy, then implicitly students are taught that Catholicism influences behavior and devotional practice but not the intellectual life.

What would it mean for a curriculum to have a liturgical orientation? I do not mean to suggest that every class in a school should study liturgical texts and practices. Rather, a curriculum that possesses a liturgical orientation keeps in view that the human person is made for the sake of happiness or beatitude. And this beatitude is learned insofar as the creature becomes capable of adoration, sacrifice, and abiding communion with God and neighbor.

Contemporary curricular discussions do not proceed with this liturgical end in mind. Schools emphasize science, technology, engineering, and math (STEM). These fields are considered essential because they enable the student to get into the right college, receive gainful employment, and participate in the country’s economic development. STEM education proposes to the student that their orientation is to participate in the economy.

There is another option. Catholic schools could argue for the liturgical orientation of curriculum itself. Science, technology, engineering, and math are not “secular” fields of study that exist alongside Catholic subjects. Rather, the entire curriculum of the school seeks to cultivate the humanity of the student so that the student may become a worshipper of God.

STEM education becomes inhumane and consequently idolatrous when it exists primarily to create students who can succeed in life. Such success may come at the cost of an authentic cultivation of wonder, memory, intellect, imagination, and ultimately love. It is not only religion and the arts that make an education humane. Rather, all the disciplines of a school should be oriented toward forming the human person to pursue happiness. And we confess that this happiness is not achieved through gainful employment with Google but insofar as we learn to bend the knee before God and enter communion with our neighbor.

In conclusion, there should be a liturgical orientation to the curriculum of a school. Catholic schools cannot take up a ST(R)E(A)M education without examining the assumptions about human happiness that such an education proposes.

The next three parts of this series will speak with more exactness about the liturgical curriculum of the Catholic school. This curriculum would approach education as connected to the human faculties of remembering, understanding, and loving.