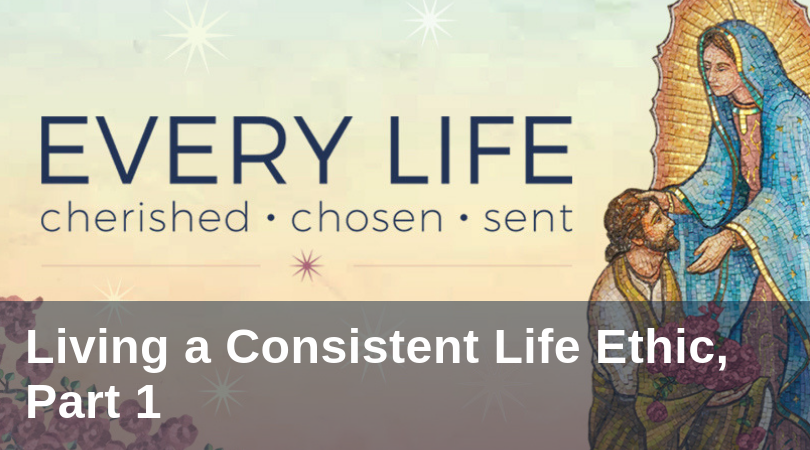 Throughout the month of October, Catholics celebrate Respect Life Month. As the Body of Christ, we are encouraged to pray and work for the protection of life from conception to natural death. In a culture that is inhospitable to life, that views human beings as disposable, we are called to live out the consistent ethic of life. But what is the “consistent ethic of life?” Quite simply, it means committing oneself to consistently living in ways that uphold the irrevocable worth of every human being. The Church has a long and rich tradition of upholding a consistent ethic of life. The Didache (ca. 2nd century A.D.), for example, describes the Two Ways: the way of life and the way of death. The first commandments of the Way of Life provide Christians with paraenetic, or moral instruction. Christians are called to “give to everyone who asks, without looking for repayment” and are expressly forbidden from committing murder, abortion, and infanticide. These prescriptions are at the heart of Christian life.

Nearly 2,000 years later, the Church continues to vigorously uphold the inviolable worth of each human person at every stage of life. John Paul II, for instance, urges Christians to embrace a consistent ethic of life. In Evangelium Vitae, he writes, “Where life is involved, the service of charity must be profoundly consistent. It cannot tolerate bias and discrimination, for human life is sacred and inviolable at every stage and in every situation; it is an indivisible good” (EV, §87). These words ought to challenge us because they suggest that all life issues are indissolubly related. John Paul II’s stance on the wholeness and unity of human life means that there is an integral connection between all issues that threaten human life.

We can often see the connection simply by looking at statistical data. For example, we know that abortion disproportionately affects women of color and women in poverty. The Guttmacher Institute, the former research arm of Planned Parenthood, reports that three out of four women of all ethnicities who seek abortion are low-income (75%). The Guttmacher Institute’s research also shows that black and Hispanic women seek abortion at far greater rates than white women. Black women, for instance, only make up about 14% of the total female population in the United States, but account for 28% of all abortions. There is a similar disparity among Hispanic women (17% of the total female population; 25% of all abortions). These same types of disparities are also evident in the over-incarceration of black and Hispanic men, and the unequal application of the death penalty. Such data suggests deep connections between racial and economic injustice and various forms of sanctioned killing.

A consistent ethic of life sees that offenses against human life operate in webs of violence and affect those who are most vulnerable—most especially children, the elderly, and the disabled. But it also sees more than this: it sees that only a profoundly consistent and costly kind of love that draws close to those in need is capable of resisting a throw-away culture. Living a consistent ethic of life, therefore, means living gently in a violent world by showing particular care for “those who are the poorest, most alone and most in need” in our daily lives (EV, §87). Because consistently living the gospel of life is not limited to a single day or even a whole month, over the next few weeks this four-part series will focus on offering practical ways to live gently in a violent world.