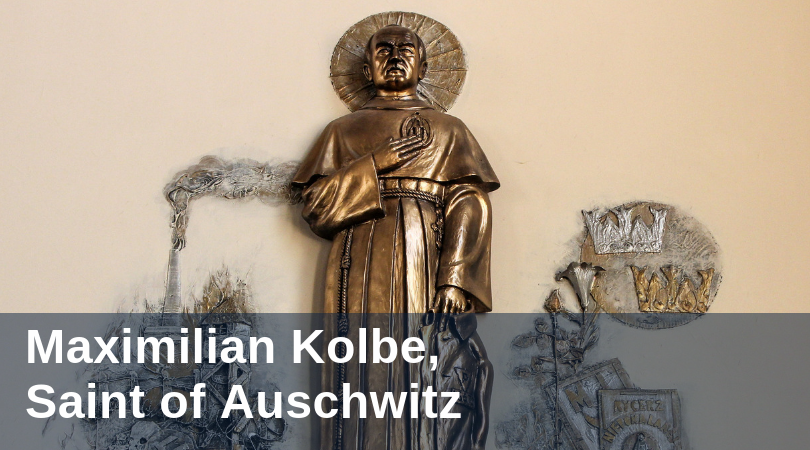 Today marks the feast of St. Maximilian Kolbe, a Franciscan priest executed at Auschwitz on August 14, 1941, offering his life in the place of a fellow prisoner who had been condemned to death.

Throughout each football season, on days when the Fighting Irish play at home, the McGrath Institute for Church Life offers a series entitled Saturdays with the Saints, in which faculty from the Institute and Notre Dame’s department of theology present a particular saint or group of saints, offering insights into their lives and teachings, pondering the lessons they still have to teach us today.

Jessica Keating, Director of the Notre Dame Office of Life and Human Dignity in the McGrath Institute, offered one such presentation on St. Maximilian Kolbe during the 2017 season, highlighting his intense love of Christ and his devotion to Our Lady in her Immaculate Conception, as well as his desire to bring boundless mercy and love into a place of unfathomable cruelty and hatred. Here are a few excerpts from her presentation, “St. Maxmilian Kolbe and the War Against Indifference,” which can be read in its entirety at Church Life Journal or viewed via the link below:

“St. Maximilian became a sign of God’s mercy, exposing the lie of the concentration camp, the lie that there is no love, no communion. So efficiently cruel and so systematically dehumanizing was the Nazi exercise of power, it even involved its victims in the machinations of destruction, in the ruthless logic of inequity. Nazis enlisted concentration camp inmates as spies, guards, executioners, effectively isolating people from one another in fear, distrust, and anger. St. Maximilian disrupted evil’s insidious logic, but not through accusation or revenge. For the saint exposes the lie of evil by breaking the chain of its transmission, not by passing it along. The saint defeats evil, even at the risk of dying. The saint insists on the logic of creation, the logic of charity, which makes space within itself for another.”

“Because he was formed in the memory of Love, Maximilian was able to walk in Christ, to fulfill his commandment: ‘Love the Lord your God and love your neighbor as yourself’ (Mt 22:37–8). And thus, his death is a paradox. It is a sign. In dying he affirmed the value of every human life because in dying he affirmed the value of one man’s life. . . .
Maximilian’s daily response to grace made him more profoundly human until he could not even see his persecutors as enemies. Plunged into Christ’s charity, he could only see in love. Conformed to the God who is Love, he emptied himself on behalf of another, laying down his life for a friend. For Maximilian, even strangers and enemies were friends. Not in a sentimental sense, but in all its radical, piercing resplendence. His love of neighbor is in the end a love that makes space within itself for others, even at the risk of being hated, even at the risk of being executed. Herein lies the creative power of love: it is animated through sacrifice, the giving of oneself without reserve.”

St. Maximilian Kolbe, pray for us. Teach us to love without limits, friends and enemies alike.