Meet the Newest Saints of the Church 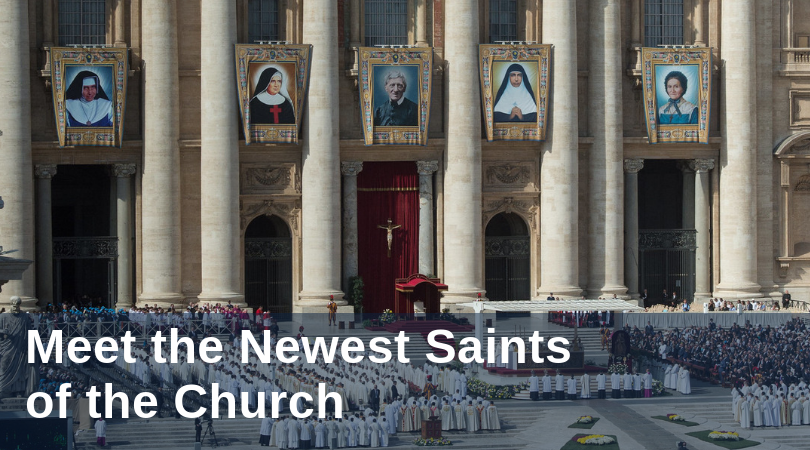 This past Saturday, tens of thousands of people crowded into St. Peter's Square in Rome to celebrate as Pope Francis canonized five new saints. Read on to learn about their remarkable lives.

Born in Switzerland, Margherita Bays is a beautiful example of a simple, domestic life offered to God in thanksgiving. Her devout prayer life sustained her not only in her work as a seamstress, but more importantly in the love and care she provided for her family, for the sick, for the poor and vulnerable. She endured intense physical pain from an operation to remove cancer of the bowel, from which she was miraculously cured, but her sufferings continued for the rest of her life, as she developed the stigmata, the wounds Christ received in his crucifixion. Margherita offered all for the salvation of others, and shows us how holiness can be found and cultivated in the everyday. St. Margherita Bays, pray for us!

Undoubtedly the most famous of the five saints canonized this past weekend, London-born John Henry Newman began life in the Anglican Church, later becoming an Anglican priest. A brilliant scholar, Newman was active in the Oxford movement, which focused on bringing back to the Anglican Church certain facets of Roman Catholicism that had been suppressed in the English Reformation. As a result of this, however, Newman became more and more convinced of the truth of Catholicism, and he converted in 1845, despite the fact that his decision jeopardized his career in the academy. Newman then served as a parish priest at a church in Birmingham, and continued writing theological works that have profoundly influenced many theologians since. He offers us an example of a saint whose dazzling intellect was accompanied and tempered by a charitable heart, a saint who sought not to elevate himself above others, but to serve them as Christ did. St. John Henry Newman, pray for us!

Born in India, Mariam Thresia was dedicated to prayer and acts of charity from the time she was a child. When she was ten, she decided to dedicate her entire life to Christ, and vowed in secret that she would remain a virgin. Indeed, much of the fruit of Mariam's spiritual life was borne in secret: she bore the stigmata, and experienced an intense spiritual dryness known as the 'dark night of the soul.' Having sought to join the Poor Clares and then the Discalced Carmelites, she ultimately decided in 1913 to establish her own small community, which eventually became known as the Congregation of the Holy Family of Thissur. Rooted in silent prayer and solitude, the Congregation founded orphanages and hospitals, caring for India's poor and vulnerable, and today, it comprises communities around the world. Mariam Thresia shows us how to persevere in prayer and charity, even when our efforts seem to be bearing no fruit. St. Mariam Thresia Chiramel Mankidiyan, pray for us!

Known as the "Mother Teresa of Brazil," St. Dulce also knew from an early age that she wanted to spend her life serving Christ by serving the poor. After joining the Missionary Sisters of the Immaculate Conception of the Mother of God, Sr. Dulce worked tirelessly to minister to and educate those living in the slums of Brazil. She founded a school, opened a library, a clinic and eventually a hospital, and started a union for workers. She would often earn money for her charitable work by busking—playing the accordion and singing on the streets, asking donations from the people who walked by. Her resourcefulness led to the successful establishment of the Charitable Works Foundation of Sister Dulce in 1959, which has served countless people over the past sixty years. Sr. Dulce is a powerful example of joyful resilience in the face of extreme difficulties. St. Dulce Lopes Pontes, pray for us!

Born in Rome, Guiseppina knew hardship from an early age: both of her parents died when she was just seven years old. She grew up in an orphanage run by the Daughters of Charity of St. Vincent de Paul. Her experience with the sisters inspired a longing for religious life, but her ill health prevented her from being able to join the Daughters of Charity. Nevertheless, she soon had an opportunity to help revive the Third-Order Camillians, which eventually led to her leading a new congregation of sisters known as the Daughters of Saint Camillus, an order dedicated to caring for the sick in their physical as well as spiritual needs. Throughout her life, Sr. Guiseppina experienced setbacks, yet she refused to allow these setbacks to thwart her efforts. When the path she had chosen was closed or blocked, she opened herself up to God's providence, trusting in the path that he would provide, even though it was different from the one she envisioned. We can imitate her perseverance and fidelity to God when we are faced with similar setbacks in our journey of faith. St. Giuseppina Vannini, pray for us!