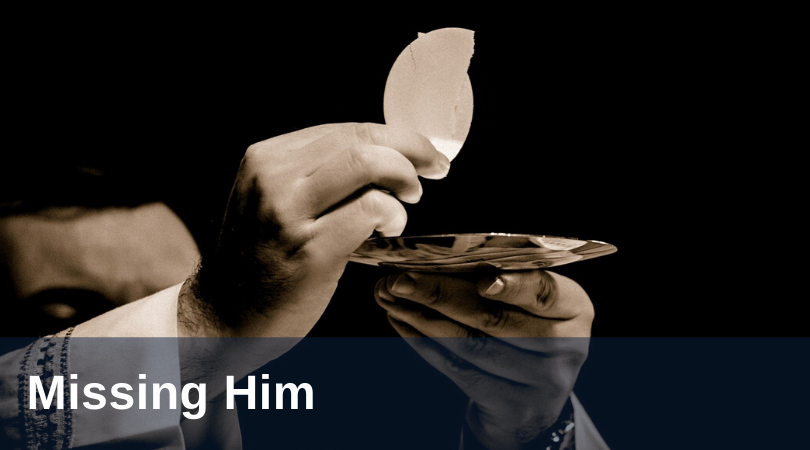 As dioceses across the country are beginning to re-open our churches and return to the public celebration of the Eucharist, some people are wondering what will happen. Will people have gotten used to staying home on Sunday? Will they wake up to the fact that the Eucharist never really mattered that much to them, since they so quickly got used to not receiving it? Or will they wake up to the fact of how much they value the Eucharist, because, once deprived of the opportunity to participate, they found they developed a hunger for it more quickly than they expected?

I am not willing to venture a prediction. In any event, we’ll know the answer soon enough. I would venture the opinion, though, that whether or not one returns to Church is, in part, related to what one did while the churches were closed.

Did we miss encountering him in that moment, in his “hour,” the “hour” which had “not yet come” at the wedding feast at Cana in Galilee, though he was present there and in relationship with people? By contrast, he declares this hour “has come” just before his Passion. Did we miss him being present, “Body, Blood, . . . soul, and divinity,” in the classical language of Trent (CCC, §1374)? Meaning, present as everything he is in the moment he gives everything he is? For “the sacrifice of Christ and the sacrifice of the Eucharist are one single sacrifice” (CCC, §1367, emphasis original), and, more forcefully, “the victim is one and the same, the same now offers through the ministry of the priests who then offered himself on the Cross” (CCC, §1367, citing Trent once again). This is the moment of the greatest intimacy in the relationship of Jesus Christ and the Church. This is the moment of the greatest truth and greatest tenderness, the moment of withholding nothing, the moment of the “I Love You” that the Bridegroom says in a whisper with his whole being, with nothing held in reserve and completely exposed, vulnerable to total rejection and even contempt, mockery, and spitting.

Did we miss meeting him at that moment? And did we miss saying it back, at that moment, “I love you too!” Did we miss having our minds “intent on the greatness, the awfulness of the Sacrifice,” as Dorothy Day once put it (Loaves and Fishes, 130)? Did we miss that unique and unrepeatable moment, made present, in the greatness of his remembrance of us, by his will and testament, by his love?

I would suggest that we missed it, maybe to the extent that we nurtured the relationship with him while we were deprived of participation in that very most intimate moment of our relationship, just as a husband or wife, separated from their spouse, misses the other the more the relationship is kept alive by gestures of communication and longing. Perhaps, too, a husband and wife, separated against their will for an extended period of time, might learn, through their continuing commitment to nurturing their relationship, that they could have been even more appreciative than they were of their moments together when they were together. Perhaps they would re-dedicate themselves to treasuring those moments, and to making sure they were always marked, more and more, by gestures and words that made that treasuring clearer.

Let’s take this opportunity to do the same, mutatis mutandis. Did we miss him? Perhaps we missed him more if, as I am suggesting, we made an effort to “keep up” our relationship, or perhaps we somehow just blew it, but, no matter. Either way, let’s all now take this occasion as an opportunity to renew our appreciation for his presence in the moment of his greatest offering of intimacy, of his saying “I’m all in, and always will be!” Let’s take the opportunity to make ever clearer, by our preparation, by our gestures of reverence, and by our secret words of thanksgiving and love meant for his ears only, how much he means to us. By all of these things, not just for this Sunday but for the rest of the year and the next and the next, we can say to him, “Thank you! I missed you so much!”