Music of Darkness and Light 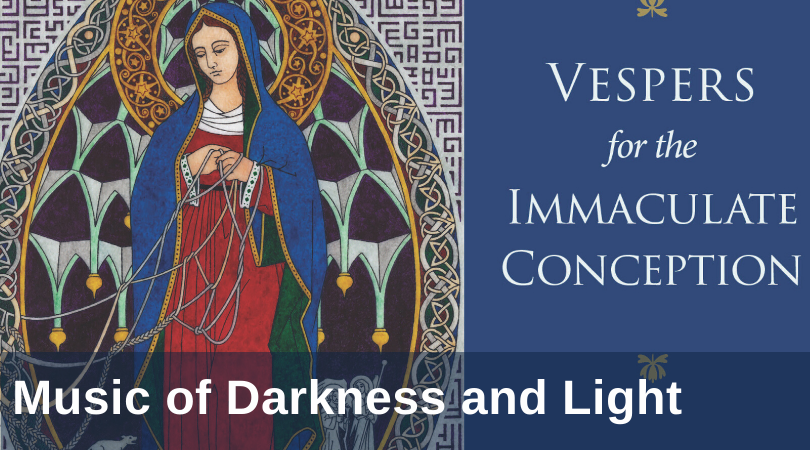 With the release of Vespers for the Immaculate Conception, Grammy-winning composer and Notre Dame Folk Choir director J.J. Wright follows up on the musical fusion of 2016’s Billboard Classical chart-topping album O Emmanuel.

Those looking for complete settings of the Vespers psalms and antiphons from the Liturgy of the Hours for the Solemnity of the Immaculate Conception will not find them here; instead, Wright has created what is described as a “concertized Vespers service . . . music set aside for contemplation of the divine but not intended for use in liturgical worship.”

As in O Emmanuel, Wright deftly shifts between musical styles, including among others Gregorian-style chant, Renaissance-style polyphony, and intricate contemporary jazz, yet these changes and juxtapositions are never undertaken merely for the sake of demonstrating compositional prowess (though they certainly do that as well). Instead, through this musical journey through multiple styles, Wright “takes the listener on a spiritual journey through ancient prayers and psalms that strengthen our relationship with Mary, Mother of God.”

From the opening notes of the Invitatory, it’s clear that we are in a sonic world whose language is simultaneously medieval and modern. Wright’s use of open fifths harkens back to organum, the earliest harmony in Western music, dating from the late ninth and early tenth centuries, when a second voice would move in parallel motion to the melodic line, usually at an interval of a perfect fourth or perfect fifth. Yet, the subtle vocal slides lend a distinctly contemporary sound, and the juxtaposition of the two foreshadows the musical fusion to come.

For this reviewer, “Covered Me” is one of the most poignant tracks on the album. Rich, gorgeous string writing opens the movement, and the lyrical melody is beautifully sung by baritone David Farwig. The title is taken from the Antiphon, “The Lord has clothed me with garments of salvation; he has covered me with a robe of justice.” Throughout the movement, there is an interplay between major and minor sonorities, perhaps an indication that, for the Blessed Mother, this garment of salvation, this robe of justice, will also become a shroud of mourning as she stands beneath the foot of the Cross. Indeed, much of Wright’s music here juxtaposes not only traditional and contemporary musical styles, but also darkness and light. This musical chiaroscuro wells up from the composer’s personal experience: Wright indicates in the album’s liner notes that much of the piece was written in the wake of his wife’s suffering a miscarriage.

The presence of both darkness and light throughout this work is distinctly Marian. It recalls the fourth joyful mystery of the Rosary—the presentation in the Temple—in which the joy of Jesus’ presentation is shadowed by the prediction of Simeon that a sword of sorrow will pierce the Blessed Mother’s heart (see Luke 2:22–38). Yet, as the album progresses, the sheer beauty of the subsequent movements is also a reminder that “the light shines in the darkness, and the darkness will not overcome it” (John 1:5).

For those who carry burdens this Advent, or for those who simply want to hear an exceptionally well-crafted and exquisitely performed work of musical fusion, J.J. Wright’s Vespers for the Immaculate Conception promises to be a worthwhile experience that will help listeners enter more deeply into the season, in which the mysteries of darkness and light/light and darkness stand at the forefront, throughout which we learn to wait patiently in the darkness, hoping more and more confidently for the light that is sure to come.