Saying Yes with Our Lady of Sorrows 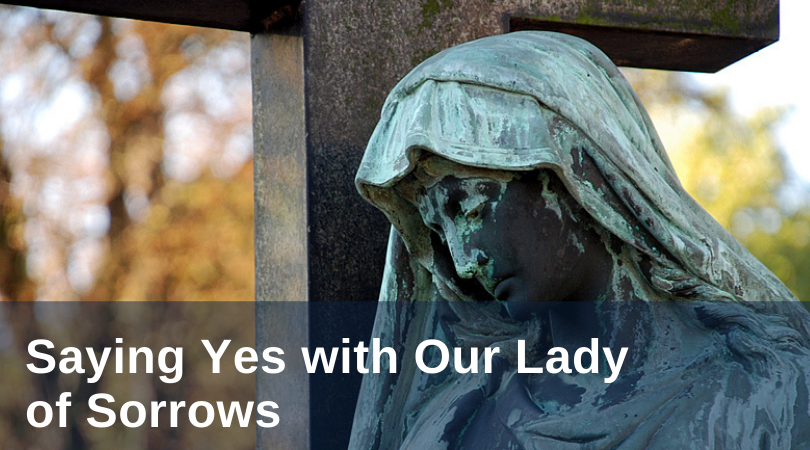 The memorial of Our Lady of Sorrows directs our attention to sorrows of Mary. Traditional devotion has identified seven moments of sorrow, seven sorrows or “dolors,” chosen to concentrate our attention on the suffering of Mary. Contemplating these sorrows exposes our hearts to the wellspring of continuous interior conversion, namely, the Passion of the Lord. For, in contemplating the sorrows of Mary, all of which arise from that same wellspring of conversion, we see the Passion as it came to dwell in a mother’s heart.

Seeing the Passion through a mother’s heart might just soften the habitual hardness of our own hearts. Why? Because seeing the Passion in this way, we see that it is not a symbol for the general suffering of humankind, nor is it the suffering of a concept called “the Incarnation,” nor is it a theological abstraction, but rather, in the way it affected the human person who perhaps of all people cared most about Jesus, her Son, the utter concreteness of the Incarnation is made searingly available to each of us. That actual, concrete Passion is the wellspring of conversion.

The prophecy of Simeon, that a sword would pierce through Mary’s soul, is perhaps not what Mary expected to hear tacked on to his prophetic canticle of longing fulfilled (see Luke 2:22–38). True, her Son, conceived and born with such special favor and remarkable circumstance, didn’t leverage any of that favor for a room at the inn, nor was the stable with the welcoming party of mere shepherds the most auspicious beginning, but the angelic choir seemed to indicate this was a passing hardship. Yet the prophecy itself . . . well, that was something that lodged in the heart, something to ponder. . . . But the thought of home and a happy family life with this special Son, and the specially worthy husband Joseph, was a greater joy to anticipate.

Until it was wrenched out of the mind by the sudden misery of homelessness and exile and uncertainty for these young refugees from terror, welcomed, by a supreme irony, only into the proverbial land of slavery, a glittering civilization perhaps less than hospitable to the impoverished foreigner than one might wish. And, once a refugee at the mercy of others, one looks at oneself differently, marked on the soul as seemingly ill-starred, and yet, and yet . . . there was that other Star to ponder, and Mary allowed her mother’s heart to be filled with that light.

Home again with the incomparable Joseph and the Son of the Star, we imagine a true joy of a family life somehow secretly resplendent with the intimacy attaching to the deepest mysteries of God which were interwoven into the very fabric of their life, even as the sword prophesied becomes more visible, closer on the horizon, as the boy is lost on a pilgrimage, lost to them forever in a populous city occupied by a foreign power. Turns out he was lost in the Temple, that the warp and woof of the mystery of their lives was ordered beyond those lives, in loss of a magnitude only hinted at here, and yet, it was the Temple he was lost in, something familiar. Maybe Jesus was consecrated like Hannah’s son for the service of God, and there was, too, the incomparably ever-present Joseph, poor in spirit and uniquely full of tenderness.

Until he wasn’t there anymore. From that point, everything then seemed to fall into the clutches of evil. So many hopes dashed, culminating in the sudden encounter on the Way of the Cross—a future not only blighted but ruined and littered with only the wreckage of a family life seemingly senselessly sacrificed to a brutal collusion of heartless political interests. My Son of great promise! At the foot of the Cross, the last shred of a family life is taken away. She finds she is someone else’s mother now. Her one claim to fame and happiness, being mother of this Son conceived so uniquely, to what end? And yet. . . she said Yes. She still says it. Even as someone else calls her Mother and her Son is really dead, taken down from the Cross, trashed as though he had been no one special at all, and now buried. No comforting dreams, no angels, no Joseph.

And yet she did say Yes . . . and now, in her Yes that she said, she sees she is Mother to many, many more she had not seen before, and to all of them, to all of us, to all of her Beloved, she says Yes.

Our Lady of Sorrows, pray for us.

The Seven Sorrows of Mary