Faith and Science: Different Perspectives on One Universe 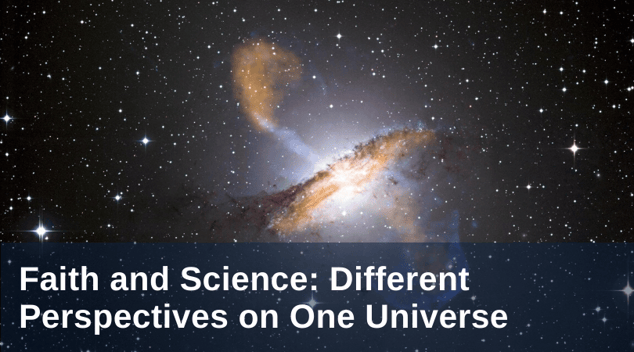 Editorial Note: this post is part of our #FaithAndScience series exploring the relationship between science and religion, and is taken from the author's textbook Faith, Science, & Reason: Theology on the Cutting Edge, 2nd edition (Midwest Theological Forum, 2019). This excerpt is reprinted here with the permission of the publisher.

Both science and faith involve encountering and understanding the same universe, but they do so in unique ways. In the words of Rabbi Jonathan Sacks, “Science takes things apart to see how they work; religion brings things together to see what they mean” (The Great Partnership: Science, Religion and the Search for Meaning, 2). Their very methodology is different. As Joseph Ratzinger has noted, both kinds of knowledge can be described as “thinking with assent.” This means that through both faith and science one reaches a conclusion about reality (thinking), which involves an assent, a response of “yes, this is true.” What makes them different from each other is the order in which thinking and assent occur. In science, thinking occurs first and makes assent possible and even necessary. But in faith, assent and thinking, will and intellect, walk hand in hand; they balance each other. Understanding this difference is crucial.

As an analogy, imagine being at the New Orleans Jazz and Heritage Festival, enjoying the finale of an incredible set from a favorite band on a sunny afternoon. Afterwards an alien spacecraft lands and an alien (who strangely can understand and speak English) approaches you and asks about the noise that had been coming from the stage. You begin by explaining what the music being played is called (blues, folk, zydeco, rock n’ roll), and you go through the type of music it is, the instruments it involves, a little music theory about harmony, keys and octaves, etc. Once you have said enough for the alien to understand, he responds: “Now I understand how the music is played. But I don't understand why everyone here is so excited about it.” At that moment you realize that the alien still has no idea about why music is composed and performed and what meaning it has to you and the other fans. Now you have an entirely different task of explanation. You might say that people love music because it moves them by putting the experience of being human into beautiful sounds—music is about experiencing your ordinary life from a new perspective. Or you might say that it unites the music fans into a common experience—music is about relationships. Or you might say that, through the poetry and musical artistry, you are drawn out of ordinary life and your own experience for a moment—music is about transcendence.

Notice that, in order to explain the music festival, you have two choices. You can explain the internal logic of the music, describing how it is composed and played. But in order to explain the meaning of music to those who play it or enjoy it, you have to go beyond how it is played and answer why questions about it. This fanciful story offers a helpful way of thinking about science and faith. Science approaches the physical universe according to its internal rules and patterns, telling us how it all works, like your first explanation of music. Faith approaches the universe according to what the whole system of the universe means: why it exists, its role in human happiness, and questions about its Creator and his intentions for it, like your second explanation of music. Just as they are in understanding music, why questions and how questions about the universe—science and faith—are very different, but taken together, they can provide a fuller picture, a deeper understanding of reality