Sex Week and the End of Romance 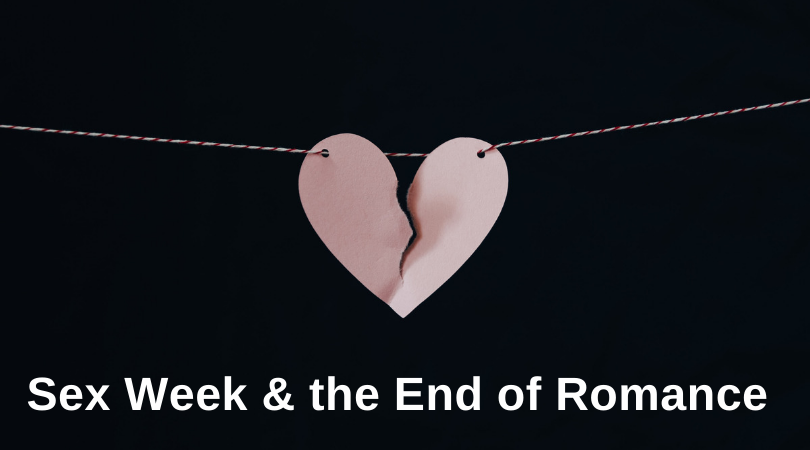 Each year, colleges throughout the United States mark Valentine’s Day with the commemoration of Sex Week. Sex Week is a carnivalesque educational event, combining a how-to-guide to sexual pleasure with events celebrating sexual liberation. Sex Week functions as a kind of secularized liturgy, in which each year we both remember and celebrate the gift of sexual liberation—the freedom to do what and who we want with our bodies.

The history of romance in the United States reveals that Sex Week and Valentine’s Day—at least as celebrated today—are often a bit closer than we imagine. Sociologist Eva Illouz describes how “early” dating was oriented toward a mixture of commerce and sexual favors. Men would take women out on dates (after courtship moved away from the home), with the hope that an expensive date would produce a return-gift of sexual affection. This kind of romance was ordered toward an exchange where romantic experiences would be traded for sexual experience. The more romance, the more sex.

In reality, Sex Week simply reveals the logic operative around much of the advertising related to Valentine’s Day. You buy your beloved a piece of jewelry, a vacation to Hawaii with the hope that you’ll receive love in return. Love becomes commodified, and when the flames of passion die away, then it’s time to do something to rekindle the spark. Nothing that a new piece of lingerie or dinner at a French restaurant won’t fix.

What is a Christian to do about this situation? It’s not enough simply to advocate a return to sexual purity. For the roots of Sex Week (and thus hookup culture) are not really about sex per se. Rather, it is the commodification of another’s body, turning every encounter into a matter of exchange. The Christian concerned about hookup culture as much as the rabid participant in said culture can reduce his or her beloved into a commodity.

Restoring romance to relationships will require a bit more than a box of chocolates or an exotic vacation. Rather, real romance necessitates a commitment to the gift of the person as a person rather than a commodity. Romance sees the beloved not as a series of experiences that titillate my passion but as a person who thinks, imagines, remembers, desires, and hopes. The most romantic gift that one can offer is the consistency of presence, of commitment to the flourishing of one’s beloved. For many of us who are married, such commitment is best shown through delighting in the duty of daily spousal love (no matter how mundane such love often is).

For those who aren’t married, don’t be too concerned about Valentine’s Day as the liturgical holiday par excellence for romance. Valentine’s Day often traffics in the very logic of exchange and consumption that fuels a hookup culture dedicated to reducing the other person to object.

We, Christians, have another option. We could practice a romance dedicated to commitment, to true intimacy, to cultivating a daily friendship with those who might become our beloved.

Sex Week and Valentine’s Day: as it turns out, a match made in heaven.