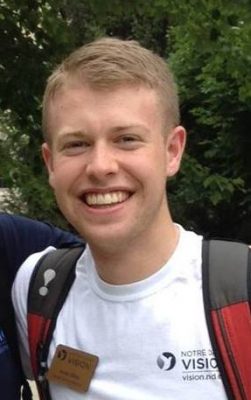 Growing up as an ultra-early riser, I would sometimes awake just as the sun was coming up to catch the early hours of Sports Center, for no reason other than to be able to say I woke up before my younger brother. Ten-year-olds can be competitive about the strangest of things.

But I was never really first up. My mother always beat me. No matter how early I seemed to rise, there was my mother in the den, off to the corner, reading from a tattered book, shuffling rosary beads through her fingers, praying. It is a tradition she continues to this day. She wakes up early and prays, and for so long, I didn’t get it. I would say my prayers, but only to clock in the time, do my duty, my penance. I’d rattle off a few Hail Marys, shuffle in a few Our Fathers, and cap it off with a rushed Glory Be. What was there in prayer that was so intriguing for my mother? So urgent and important, that she would wake up early and pray?

As I got older and delved into my studies more, reading the works of great theologians, prayer time became thinking time. I would spend my time reasoning through my issues, trying to come to conclusions and fix my problems with clean explanations. Sometimes I would marvel at myself. Here I was, exploring the big questions, while I remembered the naïve prayers of my younger sister, long ago, as she went to bed, praying about petty things that happened to her during the day. I thought there was no way God could be remotely interested in her minuscule problems at school, or her spelling quiz the next day. The God who created the vast space in the universe had time for that? Certainly not, I thought.

How wrong I was. During my second year in college, things became much less simple. All those problems I had always chalked up as pettiness—problems of no concern to a great, all-powerful God—were crushing me. A breakup, friends that seemed to have little concern for my problems, trouble focusing in and out of class, gossip, feeling alone. I never spoke of these problems aloud. I certainly never spoke of them in prayer.

I never really spoke to my mother about these things, either. I wasn’t the kind of person who shared things. But after going home for a weekend, it was clear she knew something was not right. So the next week she sent me a text. All she said was that she wanted me to know I was in her prayers. She said that each morning she gets up and prays—not some strange impersonal prayer, but a prayer for me, a prayer for each one of her six children. I told her thanks and tried to move on, trying not to be affected. But there was something about that image, about waking up to a piercing alarm, about waking up in the cold of winter, long before the sun rose, about walking out into the den to pray, not for some abstraction, not to try to figure something out, but for me? That haunted me.

A few nights later I broke down. I woke up in the middle of the night and could not fall back asleep. All that petty gossip and all those troubled friendships, well, they were not petty at all. I muttered in my head all those distressing trivialities that I once thought God couldn't care less about. I released it all then. But part of me appreciated the humor of it all. The same kid who once chuckled as his younger sister muttered to God her worries about who to sit by at lunch the next day now sat there distraught about a breakup and some college drama. And a part of me was intent to go back to bed that night angry. I could lie there and bring this all before God, and it wasn’t going to change a thing. It wasn’t going to be fixed. But as I dozed off, a seed of a thought hit me that would grow into greater understanding over the coming days. Maybe I was finally learning how to pray.

Over the coming days I started to think about how often I had told others I would pray for them. I used it as a meaningless phrase to convey that they were on my mind. But had I ever really prayed for them? Really prayed? The kind of prayer where you feel such care and urgency that you would wake up early like my mother has all these years? And so a few days later I prayed for her, my mother. I prayed that above all, she could know—despite how little I told her—how important she was to me and how she was the model for my faith. I prayed that for one day I could bear some of her anxieties and worries, for I understood how long she had been asking to bear mine.

I count these days as one prayer in my mind—the first real prayer I might have ever prayed. It began in bringing forth all my petty problems to God, because there are no petty problems for God. It began in bringing those to the Cross and not trying to fix them, not trying to figure something out, simply allowing them to be, simply being in the presence of my God. It continued as I felt love for someone other than myself, and prayed for the person I always thought I was going to pray for but never really had. This was prayer, an experience of nearness with God that is far from alone, an experience of deep communion and love. By giving something of myself—my deepest concerns—I began to desire to be something for someone else. I desired to pray.

God is nearer to us than we could ever imagine, and so deeply attuned to the small things: our relationships with one another and the little pieces of our lives. Was that text from my mother not an answer to the prayer I was too proud to pray? Though I had not prayed with that level of concern and vulnerability before, the seeds had been there. Prayer was so nearly there. But that text struck such a chord in my heart, and touched so many worries that I had longed to express. The response to my prayer, the answer to my problem, was the prayer of another—a sign that I was and am loved. All those days that I was too proud to come before my God with my problems, God had placed someone in my life to pray that prayer for me. My problems were significant to my mother, and they were significant to my God. Absolutely nothing is unimportant to him. God never tires of our prayers.

Featured image by twinsfisch via Unsplash