The Church and Her Canon of Saints 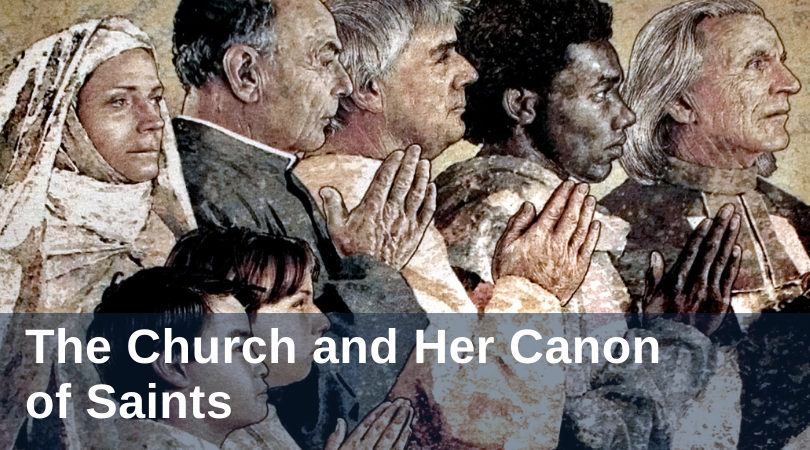 Honour is flashed off exploit, so we say;
And those strokes once that gashed flesh or galled shield
Should tongue that time now, trumpet now that field,
And, on the fighter, forge his glorious day.
On Christ they do and on the martyr may;
But be the war within, the brand we wield
Unseen, the heroic breast not outward-steeled,
Earth hears no hurtle then from fiercest fray.
⁠Yet God (that hews mountain and continent,
Earth, all, out; who, with trickling increment,
Veins violets and tall trees makes more and more)
Could crowd career with conquest while there went
Those years and years by of world without event
That in Majorca Alfonso watched the door.

This beautiful poem about St. Alphonsus Rodriguez, SJ (1532–1617) was written by Gerard Manley Hopkins, SJ (1844–1889). St. Alphonsus was the porter at a Jesuit College on Majorca for the last 45 years of his life. We know him today, in 2019, and here in the United States because his sanctity was uplifted by the Church’s process of canonization. Thus, he who “watched the door” for “years and years . . . without event” can bring hope to those who wage “the war within [their own] heroic breast.”

St. Alphonsus is also a great example when people ask if it is only the folks who have been canonized by the Church’s official process that are saints. What about my grandmother? Or my first grade teacher? Or my deceased friend? What of all those who have wielded the unseen sword? The example of St. Alphonsus might suggest: Yes! In all those hidden hearts, there are “fields” to be “trumpeted.”

And that is just why the Church has a process for canonization.

To be canonized means to be added to the list of saints. We hear part of this list at Mass during the eucharistic prayers. But the word canon has a second, more literal meaning: a measure. Putting the two together, the list presents various “measures” for the Christian life, such that the saint’s life is authentic and truly Christ-like.

The first saints, however, were not canonized. In the very beginning, they were acclaimed by their deaths as martyrs. Think of the names listed in the Roman Canon (Eucharistic Prayer I), Pro nobis peccatoribus: John the Baptist, Stephen, Matthias, Barnabas, Ignatius, Alexander, Marcelinus and Peter, Felicity and Perpetua, Agatha, Lucy, Agnes, and Cecilia. All martyrs! To these we added saints acclaimed by the “voice of the people” who recognized Christ in their lives of self-sacrificial love and merciful activity, though they may not have been martyrs. Thus, in the early church saints came to be defined locally, by the community that acclaimed their holiness and looked to them for examples of Christian living (and dying). In the Middle Ages the process of canonization introduced these local heroes as universal saints, uplifted for all to imitate. Through canonization saints could become a “measure” of holiness for all.

In more recent years, especially under Pope St. John Paul II, the Church worked diligently to offer a canon, or a list, with more and more examples. We needed saints who were mothers and fathers and doctors and porters. Under Pope John Paul II over 400 new saints were added to the Catholic canon, including St. Maximilian Kolbe, St. Rose Duchesne, St. Teresa Benedicta of the Cross, and St. Alphonsus Rodriguez.

Today, Pope Francis has canonized over 800 saints! And so we continue to receive new exemplars in holiness, from Sts. Louis & Zelie Martin to St. Oscar Romero. The addition of these saints stretches our imaginations, offering manifold ways Christian holiness can be realized. By “trumpeting” such hidden “fields” the Church names her saints, and, yes!, your grandmother just might be among them, even if still hidden.