The Parish Festival: A Chance for Encounter and Evangelization 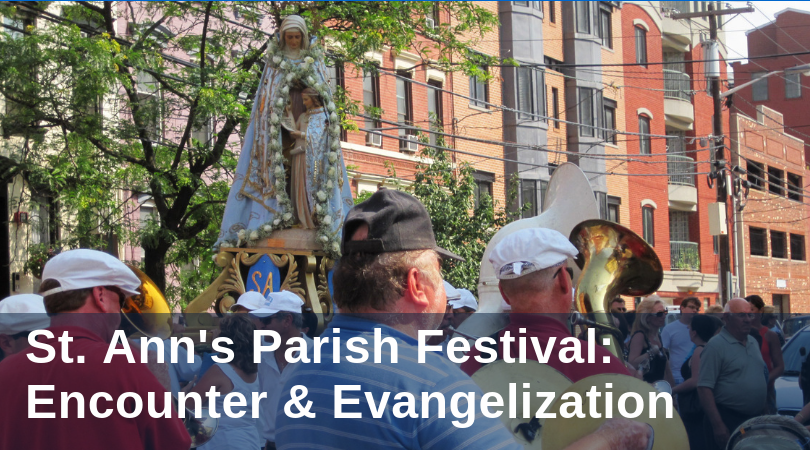 The Church designates July 26 as a relatively quiet “memorial” of Saints Joachim and Anne, the parents of the Blessed Virgin Mary. For me, however, there are few days in the liturgical calendar that evoke more energetic memories of a geographical community and parish family than this one. This is a feast of visceral evangelization that immerses all five senses and brings people together—close together.

The feast of St. Ann in Hoboken, New Jersey

My wife, baby daughter, and I had plenty of visceral experiences during the mid- to late-1990s, when we lived in Hoboken, New Jersey, across the Hudson River from New York City. We enjoyed participation in St. Ann’s Parish, a Capuchin Franciscan parish widely known for its traditional, albeit somewhat crowded and raucous, yearly celebration of St. Ann.

The parish, established in 1900 to serve primarily Italian-speaking immigrants, is currently in the thick of its 109th annual fund-raiser, the Saint Ann Novena and Italian Festival. The preparatory novena has concluded, and the street fair that began on July 24 won’t end until Sunday, so there’s still time to partake in the zeppole donuts and other fattening foods, numerous booths with games or religious articles, plus kids’ rides and diverse musical performances.

But today’s official July 26 memorial is big. It attracts up to 2,000 people inside and outside the beautiful church (built in 1927) for a richly textured morning Mass that is immediately followed by a procession. A band and many parishioners accompany a large statue of St. Ann through the local neighborhood. The area is now occupied by some of the “born and raised” Italian families and a growing population of professionals residing in condos, not far from Hispanics, African Americans, and others in the bustling city.

The importance of the festival for the community

This week, I phoned Fr. Francis Sariego, OFM Cap., who was pastor of St. Ann’s when we were parishioners. He now lives at a Franciscan retreat house in Wilmington, Delaware, serving as chaplain for the regional fraternity of the Secular Franciscan Order. Fr. Francis recalled, after being away from the festival for 15 years, that a year’s worth of planning for every festival made it an organizational “headache” sometimes. But his other reflections showed fatherly enthusiasm, focusing on the zeal with which long-time parishioners and newcomers teamed up to express pride in the church’s historical roots—aiming to bring throngs of tourists into town.

“It’s a sign of unity, strength, faith, and openness, of not being ashamed of who we are, and of evangelization,” he said. He remembered “the joy when you see how many people come from afar to share what you’re celebrating.” For some, especially the families with Italian heritage, it’s a connection to the patron saint they had brought with them to a foreign country. The procession honoring St. Ann highlights a continuity of love modeled by “this ancestor who gave birth to the woman who was willing to say ‘yes’ to the impossible.” The whole event constitutes “a pilgrimage,” the priest added, because, “to be part of it, you’ve got to walk.”

The festival as a moment of evangelization

St. Ann Parish has ensured that the novena, the Eucharist, and the procession remain central in festival publicity, Fr. Francis said. The event displays Catholic practices shared boldly with the secular world, not to exclude but to encounter. The feast tells visitors, “You’re a part of our lives, too.” It offers “a knowledge of God” in everyday life, and “the theology comes later.”

I asked if this kind of event can offer lessons to parishes elsewhere. “There are so many things we can do,” my former pastor said, so long as hosts incorporate a Franciscan commitment to “a disarmed heart” that welcomes all people in our current culture. The path toward any variation of “festival” begins with a multi-dimensional sense of evangelization: a parish family reaches out with “the power of God that goes beyond four walls,” not only to serve and listen to others, but to express things at the core of its own solidarity—incarnated in sights, sounds, tastes, and activities. The encounter is also a two-way street, inviting people inside the parish’s strong culture in a complementary, not confrontational, way.

“Once you see what attracts other people, then you can work on making your parish more welcoming without watering down the essence of who you are.”

A visceral sense of faith-grounded identity that one can share in the public square boosts evangelization through tales that touch everyone’s heart, Fr. Francis said. “It reminds us where we came from and helps us to focus on where we’re going.”