The Triduum in Art: Holy Thursday 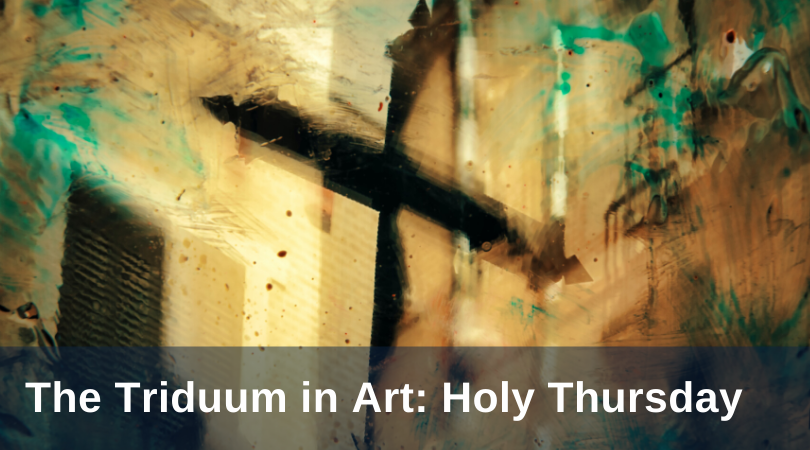 On Holy Thursday, we celebrate the last night in the life of Christ, when he “gave the supreme expression of his free offering of himself,” and “transformed [the] Last Supper with the apostles into the memorial of his voluntary offering to the Father for the salvation of [all]” (CCC, §610). Jesus, in offering his Body and Blood under the veil of bread and wine, anticipates the complete gift of self he will make on the Cross the next day. In the fathomless grace of the Eucharist, by the working of the Holy Spirit, Jesus draws all who receive him into unity with himself and with one another, and in this communion, he offers them to the Father.

Yet the Gospel proclaimed on Holy Thursday is not that of the institution narrative as recorded in the synoptic Gospels (although the second reading recounts the institution of the Eucharist through St. Paul’s First Letter to the Corinthians). Instead, the Church proclaims the narrative from John’s Gospel, in which Jesus demonstrates for his Apostles the unity and love he desires them to embody in the world:

“So, during supper, fully aware that the Father had put everything into his power and that he had come from God and was returning to God, [Jesus] rose from supper and took off his outer garments. He took a towel and tied it around his waist. Then he poured water into a basin and began to wash the disciples’ feet and dry them with the towel around his waist.” (John 13:2b-5)

It is this narrative of love which the Word made flesh proclaims through a Eucharistic life of humble service that draws our gaze this Holy Thursday, and provides the inspiration behind Ford Madox Brown’s painting: Jesus Washing Peter’s Feet (1852–56). 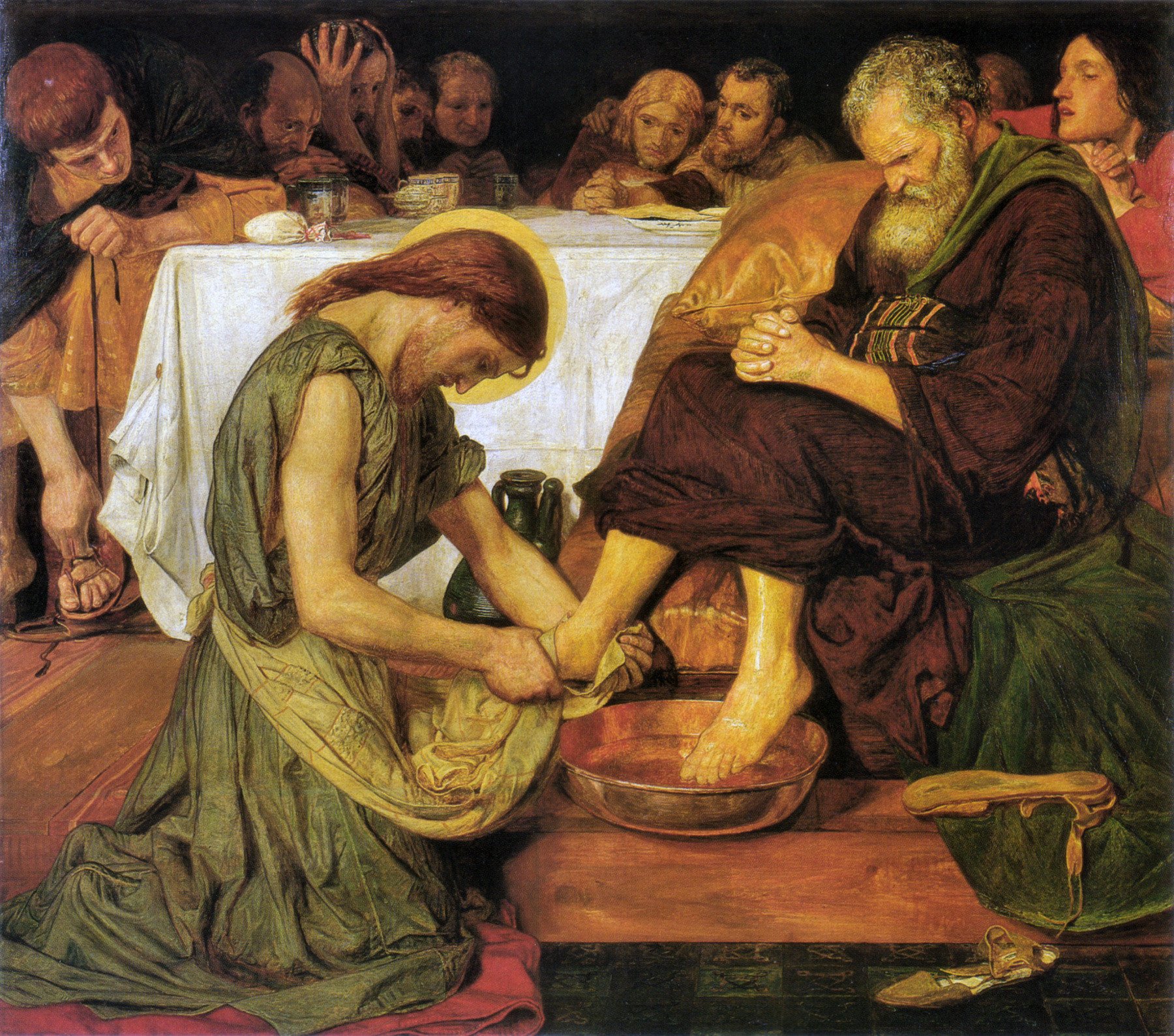 Ford Madox Brown (1821–93) was associated with the Pre-Raphaelite Brotherhood movement in Victorian England, which sought to revive the artistic style from the late Middle Ages and early Renaissance, featuring vibrant color and realistic detail. More important, however, was the Brotherhood’s desire to reclaim art’s spiritual nature; thus, the Pre-Raphaelites produced many works with sacred subjects.

In Jesus Washing Peter’s Feet, the vertical perspective is compressed, the vantage point low. Through this technique, the artist conveys the humility of the eternal Word who descended from the heart of the Father, taking on human nature in order that humanity might become divine (see CCC §460). In this scene, Jesus Christ, the Word made flesh, literally lowers himself to serve sinners. And yet, in the Eucharist, this same Word made flesh lowers himself even further than he does in washing his Apostles’ feet: Jesus so desires to remain with his flock that he veils his Real Presence under the forms of bread and wine in the mystery of the Eucharist.

Such a mystery defies comprehension, as Brown reminds us in the Apostles’ all-too-human facial expressions. Each one is worth pausing over, as each beckons us, the viewers, to consider how we might have responded in witnessing this scene. Peter, as one of the central subjects in this painting, begs this consideration more than the other Apostles. Here he sits, hands folded in contemplation, perhaps still in disbelief that he is actually allowing Jesus to wash his feet. Or, perhaps the import of Jesus’ actions is sinking in. Whatever Peter’s thoughts, the seeds of servant leadership are being planted here that will blossom on Pentecost Sunday and bloom as Peter offers his own life on a cross in imitation of his Master.

As we follow Peter’s gaze, we turn our attention to Jesus himself. Brown initially portrayed Jesus as lightly clad, as described in the Scriptures, portraying the Incarnate Word in his full humanity. However, Victorian audiences criticized this, favoring depictions of Christ that set him apart from the world, so Brown added the tunic, downplaying Jesus’ human nature. Still, Jesus’ facial expression exudes a beautifully human quality. Head turned downward, Jesus is entirely focused on washing his friend’s feet, impervious to the confusion at the table. His captivating facial expression can be summed up in one word: love.

Love descends from on high to make his dwelling among us. Love grows up in poverty and obscurity. Love proclaims the Kingdom of God and seeks out the sick and the sinner. And Love gives itself unto the end: washing the feet of disciples, offering Body and Blood in bread once bread and wine once wine, enduring the agony, the abandonment, and the humiliation of the Cross. Love dies, so that Love may rise in newness of life and bestow that life upon those who would do for others what he has done, offering themselves as oblations of love.