Wounded by Love: History, Evangelization, and the Sacred Heart 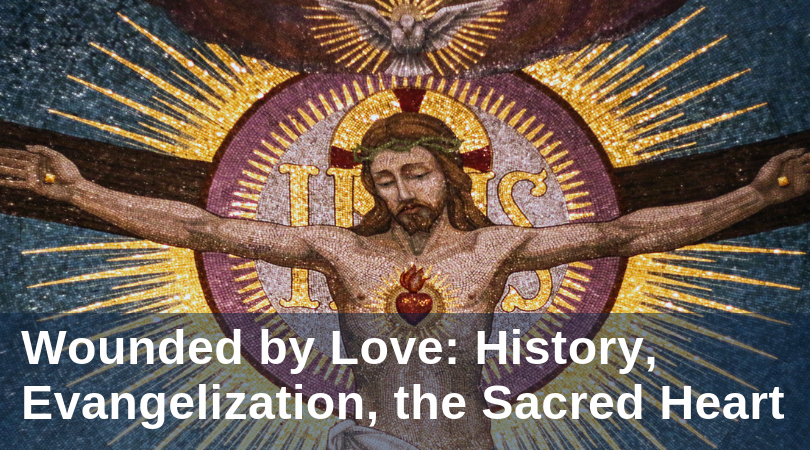 Followers of the University of Notre Dame’s athletic programs are well aware of the Irish heritage of Notre Dame’s student body. But many of these same followers may be surprised to discover the French roots of Notre Dame.

The religious order of the Congregation of Holy Cross was founded in a French town, LeMans, in 1837 by Blessed Basil Moreau. The Congregation was formed to respond to the urgent needs for Catholic education following the French Revolution. Catholicism, once integrated into French society, was now viewed suspiciously by the Republic.

The Congregation quickly produced missionaries, sending them around the world. In 1841, Blessed Basil Moreau sent a group of French missionary priests and brothers to South Bend, Indiana to found the University of Notre Dame.

St. Margaret Mary Alacoque received in her visions a series of requests. Some of these are still known and practiced today, such as the reception of Holy Communion on the first Friday of each month, as well as spending an hour before the Blessed Sacrament. Others are less well-known, including the consecration of France to the Sacred Heart of Jesus, as well as the construction of a national chapel in honor of this devotion.

The cult of the Sacred Heart was linked closely to an understanding of French identity as Catholic. During plagues, the French would process with an image of the Sacred Heart, asking God to rescue them from death. During the Revolution, those French who were wary of the religious reforms enacted by the Republic wore images of the Sacred Heart around their necks. Those who advocated for a post-religious society in France mocked the Sacred Heart of Jesus because it was too material, too bloody, too superstitious. If there was to be a religion, it should deal with ethics, with “doing good,” with the French nation itself.

Naturally, the Congregation of Holy Cross, formed in this national cult of France, would name their church at the University of Notre Dame after the Sacred Heart.

And this is good news for us today! The Sacred Heart of Jesus is not just a pious feast for those who still like such things. Instead, it is a living icon of God’s involvement in human history. Through Jesus Christ, God has become immersed in the sufferings and joys of the human condition.

This divine involvement, therefore, is not reducible to Sunday worship alone. Catholicism is a public religion that seeks to bring divine mercy to all humanity at every moment in every place and circumstance. For this reason, it is through our devotion to the Sacred Heart of Jesus that we cry out for the nation-state to recognize the dignity of the unborn child, the migrant, and men and women on death row.

God has a heart. It’s the Church’s mission to become this living, bleeding heart of mercy for the world.