Choosing a Saint for the New Year 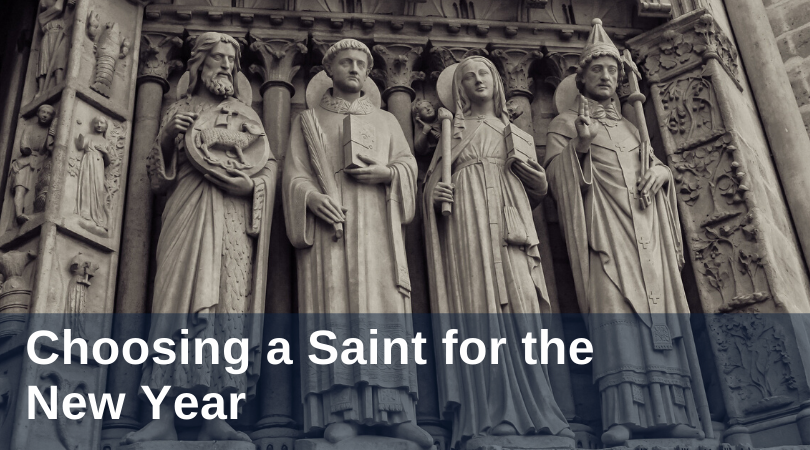 There are a lot of reasons why I don’t like the prescription to be “the best version of yourself,” but maybe the strongest one is that it not only ends with “yourself” but actually begins with “yourself.” It is as if there is a preset catalogue of “yourself-s” and the point is to choose the best one. Or, instead, it means something like maximizing your potential, especially spiritually. Either way, that’s the wrong image, and images shape our imaginations.

I also don’t like this prescription because I like the saints, and the saints are not versions of “myself.” Nor are they versions of “themselves.” There was no catalogue, nor was there some kind of preset potential. Rather, there was sin and grace, charity and sacrifice, penance and thanksgiving, longing and venturing and growing and openness to the great unknown of Christ.

I bring this up because we are at the dawn of a New Year. This is resolution season. It is the time for new beginnings. And so it would seem that it is high time for us to start becoming “the best version of ourselves”—the time for “our new plans” to become “our new selves.”

I have a different recommendation: dedicate yourself to a saint. The saints are not versions of us. They are unrepeatably holy. They have forgotten themselves.

Here are a few things to keep in mind as you consider dedicating yourself to a saint during the New Year:

An obvious first step. But how? I’d recommend against choosing a saint whom you think is most like you, or whom you are most like in some way. Maybe forego the ones to whom you have a natural attraction. There’s some danger of starting and ending with yourself in that. Instead, try to identify a saint who is clearly not like you. Or, choose one for a reason other than their resemblance to you. In that vein, I happened to choose St. Francis of Assisi as my Confirmation saint a few decades ago. He was likable and popular, but he didn’t really start to work on me until many, many years later, when I was struck by his zeal to give up comforts, to remain in a posture of humility, and to continually seek after opportunities for penance. In these ways, St. Francis of Assisi today does not help me become a better and better version of “myself;" instead, he challenges me to stop being that “self” that I protect and guard—the one who likes comfort, who is boastful, and who is slow to admit fault.

Here is what I have found from my study of and my devotion to the saints: the single best way to imitate a saint (and in fact to really get to know them) is to practice praying the way they prayed. So, for example, if you are fostering a devotion to St. Teresa of Ávila, it is one thing to offer your intentions through her intercession, but a completely different and (I think) deeper thing to regularly practice the Prayer of Recollection that she herself practiced and she herself taught. The second-best way to imitate a saint, then, is to practice the kind of charity they themselves practiced. Whom did they serve and how? Go and do likewise.

Third, offer it all to the Lord.

Every week, review your prayer and your charity in imitation of the saint. Be honest. Then, at Sunday Mass, offer the fruits of your imitation to the Lord, as well as your shortcomings. The most important thing is to share it all with the Lord, whether you think the week has been a “success” or a “failure.” The only success in the spiritual life is offering whatever we have to the Lord. That is the true imitation of the saints.

There is no way to see this in advance, but what we find if we dedicate ourselves to imitating the saints is that they lead us past ourselves and into the life of holiness, hidden in the Lord.