Faith & Science: The Foundation of a Catholic Approach to Science 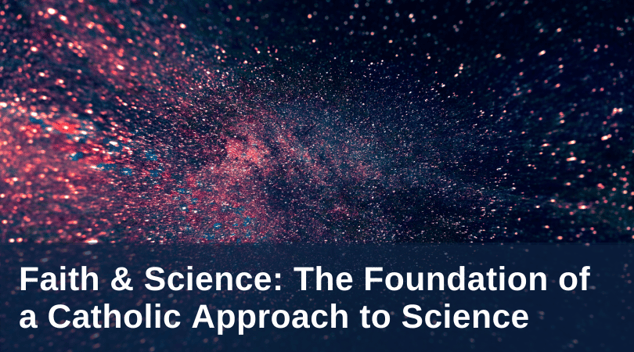 Editorial Note: this post is part of our #FaithAndScience series exploring the relationship between science and religion, and is taken from the author's textbook Faith, Science, & Reason: Theology on the Cutting Edge, 2nd edition (Midwest Theological Forum, 2019). This excerpt is reprinted here with the permission of the publisher.

“Faith and reason are like two wings on which the human spirit rises to the contemplation of truth; and God has placed in the human heart a desire to know the truth—in a word, to know himself—so that, by knowing and loving God, men and women may also come to the fullness of truth about themselves.” (Pope St. John Paul II, Fides et Ratio, Prologue)

With this beautiful image of the human spirit soaring in flight upon two wings, Pope St. John Paul II (1920–2005) began his famous 1997 letter on faith and reason.

Reason is not merely the ability to think clearly and come to correct answers about certain kinds of problems. Rather, it is the capacity for wisdom. In the words of Fr. James Brent, O.P., “Wisdom is an all-embracing understanding of reality as a whole in light of ultimate causes, especially in light of the end or goal of all things.”

An act of reason may involve specific problems, but reason understood as wisdom is never limited to this or that intellectual activity or inquiry. Physics, psychology, mathematics, etc., are all examples of reason in action. But wisdom is more than physics, more than psychology, more than mathematics. It is any authentic pursuit of truth and the openness to all things true. Modern science in all its forms counts as an authentic and often difficult application of human reason to the material world, and a true way of wisdom, but by no means the only one.

If reason is open to all things true but above all to the causes and goal of all things, then of course the question of the greatest truth, the Truth behind all truths, questions about God and the meaning of reality, can never be neglected by it. But because our capacity for reason is limited, we know that “the meaning of it all” is not accessible to our minds alone. Reason leads us to pose questions we could never use reason to answer. And it is here that a whole new kind of knowledge, the knowledge brought about by entrusting one’s whole self to God, can give us answers beyond the capacity of the human mind left merely to its own natural abilities. This entrusting of one’s whole self to God, and the new path of knowing it makes possible, is called faith. In the words of Cardinal Joseph Ratzinger, the greatest Catholic theologian of our day who later became Pope Emeritus Benedict XVI (b. 1927), faith “is not an act of [reason] alone, not simply an act of the will, not just an act of feeling, but an act in which all the spiritual powers . . . are at work together. It is only because the depth of the soul—the heart—has been touched by God’s Word that the whole structure of spiritual powers is set in motion and unites in the ‘Yes’ of believing.”

St. John Paul II not only extolled faith and reason in general as both necessary and harmonious, but he also applied this vision to the scientific investigation of the universe. He declared, “Science can purify religion from error and superstition; religion can purify science from idolatry and false absolutes. Each can bring the other into a wider world, a world where both may flourish.” Many struggle with believing in God because of what they think science says, and many others struggle with accepting the discoveries of modern science because they fear that it leads away from God. Perhaps looking at them together, as St. John Paul II recommended, can help us embrace both.