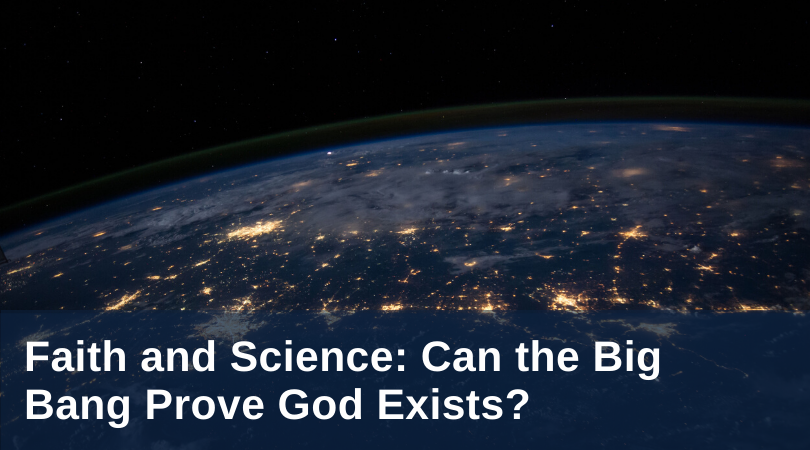 Should the Big Bang be understood, as it is by some, as proving the existence of God and the divinely inspired truth of the Bible? The answer is no. St. John Paul II once cautioned that we should not use the Big Bang Theory in this way (Message to the Director of the Vatican Observatory,1988). In 1985, he said that “to desire a scientific proof of God would be equivalent to lowering God to the level of the beings of our world, and we would therefore be mistaken methodologically in regard to what God is. Science must recognize its limits and its inability to reach the existence of God: it can neither affirm nor deny his existence” (General Audience, July 10, 1985). We cannot find proof of God’s existence through scientific discovery. Science studies the material world, and God is not part of the material world.

That doesn’t mean that believing scientists cannot affirm God’s existence, but when they do so, it is through either faith or arguments from philosophy, not through any scientific method. In the words of particle physicist Stephen Barr:

That the Big Bang theory is correct, however, does not necessarily settle the question of whether the universe had a beginning. There remains the possibility that the explosion that occurred 14 billion years ago was only the beginning of a certain part of the universe or a certain phase in its history, rather than the beginning of the universe as a whole. In fact, over the years many scenarios and theories [in which the Big Bang is not the Beginning] have been proposed. (Barr, The Believing Scientist, 128)

In scenarios such as the bouncing universe, the cyclic universe, and “eternal inflation” models, the Big Bang was not the beginning of time, space, and matter; rather, it was merely the beginning of a particular phase of the history of the universe (Barr, 128). Many contemporary Catholic theologians and philosophers would agree with St. Thomas Aquinas that the existence of a first moment in time cannot be absolutely proven through reason unaided by faith because it is impossible to see past something that is supposed to be the first moment to verify that it is truly first. The words “In the beginning...” will always remain a matter of faith because of the limitations of human reason.

So, if it is not a slam-dunk proof of either God’s existence or a beginning, then why is the Big Bang Theory important for theology? Three reasons stand out.

First, the Big Bang Theory may suggest that more than science is needed to explain the universe. When one runs up against what might be the very limits of time and space, one has to confront the issue of a Cause that transcends time and space. Once again, this does not mean that the moment of the Big Bang is necessarily the beginning. But, since it is as far back as we can currently observe, it does raise the question of not only the historical beginning but also of the origin of the universe—what causes it to exist at all?

Third, the Big Bang Theory shows us that time—like space and matter—is not a necessary feature of existence but merely a feature of the physical universe. Where there is no universe, there is also no time. Or, put in theological terms, time itself is something created. It only exists as a result of creation. This supports the traditional Christian concept, clearly articulated by St. Augustine, of God’s timelessness, his eternity. God, transcending the universe, also transcends time. Time, the measurement of change, does not apply to God who, being perfect, never changes. The Big Bang, as potentially the first moment in time, draws the mind to marvel with St. Augustine at the eternal mystery of God who is outside of time.