The Church and Her Saints 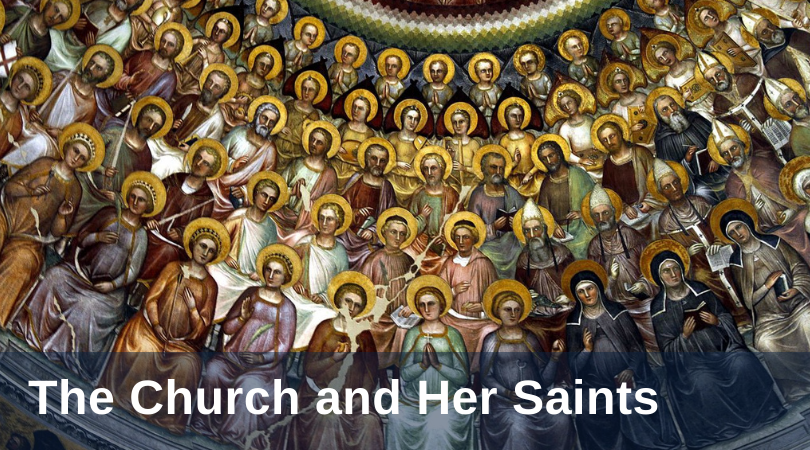 History is full of hope. This is what the saints tell us and why their stories should be told and celebrated in every day and age. The holy men and women who have gone before us direct our attention toward the final unfolding of history, when God will be all and in all. However, this is not always obvious, at least it wasn’t to me. As a young school girl, and even as a graduate student, history was a subject for study. I learned about the past, and often that past that didn’t seem to have much to do with me, at least not here and now, nor in the future.

The Church has a different understanding of history. Tradition, Dei Verbum tells us, is the form of Revelation that coincides with the Church’s history. Tradition is the Church, “all that she herself is, all that she believes” (DV, §8). “All that she herself is” and “all the she believes” has been handed to her, from the generations before, going back to the very (historical!) lips of Christ. As the ages unfolded, and the generations handed on all that they were and all that they believed, the Church carried the Gospel forward in her liturgy and her sacraments, in her works of mercy and her profession of faith. Each generation annunciated the Church, and each generation uttered a Mary-like fiat. And today, we are called to be the Church, her members who are asked to carry the Gospel forward, handing “all that she herself is” to the next generation. I am history, and so are you!

Thus, the saints have become my history teachers. They have opened history up from something of the past, to something of the here and the now, and of the future, too. In his Theological Investigations, Karl Rahner put it this way:

"When the Church declares someone to be a Saint, this is much more a necessary part of the Church's realization of her own being . . . she must be able to state her holiness in the concrete. She must have a 'cloud of witnesses' whom she can indicate by name. She cannot merely maintain that there is a history of salvation (without it being known exactly where it takes place with real, final success), but she must really relate that very eschatological history of salvation which she is herself. The prize of her actual Saints belongs to her innermost being and is not merely something which she 'also' achieves 'on the side,' something which has been inspired by a purely human need for her worship." (Theological Investigations, 93 & 96)

Yes! Of course! The saints show us how to be the Church by bearing the Gospel message, as the historical in-breaking of God’s Kingdom.

Let us close with an example from our more recent history—some historical moment we surely learned about in grade school or high school. But let’s look at it from an ecclesial standpoint, through the lens of the saints as “realizing” the Church’s “own being,” and so also from an eschatological vantage point. The story of St. Maximilian Kolbe, martyr of charity in the darkest of historical moments, is a fitting example. In A Man for Others, George Bielecki, Kolbe’s fellow prisoner in Auschwitz, recalls the effects of Fr. Kolbe’s death:

"It was an enormous shock to the whole camp. We became aware someone among us in this spiritual dark night of the soul was raising the standard of love on high . . . Thousands of prisoners were convinced the true world continued to exist and that our torturers would not be able to destroy it. More than one individual began to look within himself for this real world, found it, and shared it with his camp companion, strengthening both in this encounter with evil . . . His death was the salvation of thousands. And on this, I would say, rests the greatness of that death. That's how we felt about it . . . That was a shock full of optimism, regenerating and giving strength; we were stunned by his act, which became for us a mighty explosion of light in the dark camp night. . . .” (A Man for Others, 233)

In St. Maximilian the Church was “realized” because St. Maximilian himself was God’s “standard of love.” He was the “mighty explosion of light.” He was God’s Gospel of Love. And, as Bielecki shows, this means that St. Maximilian unveiled the reality of Love that is within each of us, waiting to make us saints. With hope, let us respond, Fiat mihi.

Read more about St. Maximilian Kolbe and over 75 other saints in our free, printable e-book, "Witness to Holiness." Use this booklet for faith formation in the classroom, parish, or at home!