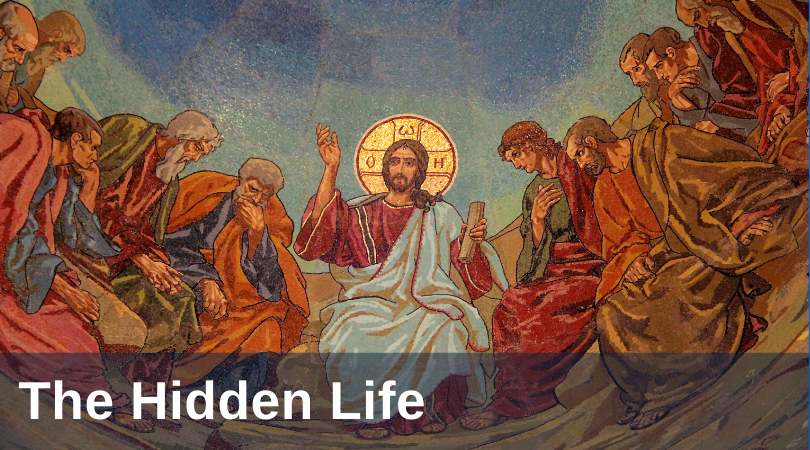 Editorial note: This blog is the third in a six-part series featuring our free Lenten resource, "A Scriptural Pilgrimage to Christ Through Lent," written by Lenny DeLorenzo.

There are usually two versions of reality happening simultaneously. One is made up of the motives and intentions surrounding our actions and conduct that we project and display to each other. The other is sourced in what each of us really thinks, intends, and attempts. There is, in other words, what we say we are about and what we are really about. Sometimes these two versions overlap, but more often the latter hides behind the former, like Oz himself operating behind his impressive performance.

Jesus sees right through. To him, there is no hidden life, just as in him nothing is hidden. He is who he shows himself to be, and he sees who we really are behind who we show ourselves to be. He sees reality, not manufactured versions. Actually, his vision is reality, so that what and how he sees is the measure of what is real.

The psalmist was stunned into recognition before the gaze of the Lord, confessing:

Even the darkness is not dark for you,

the night is as bright as day;

for darkness is as light with you.

Humility like that is the beginning of wisdom. The psalmist does not say that he has amended his ways; rather, he confesses that the Lord sees all. He has admitted that his own charades are ridiculous in the face of the One who is all truth. The constant, probing gaze of the Lord is both comforting and troubling. We are known in his gaze. The pilgrimage of Lent must pass into that gaze if we are to allow the Lord to embrace us, as we are.

There might be no more disturbing question than the one Jesus asks of the scribes and Pharisees: “What are you thinking in your hearts?” (Luke 5:22). From that place where your will originates, where your motives emerge, where your operative desires swirl, Jesus presses his listeners to take stock of what is coming forth. He does not accept the charades, even and especially the charades of religious zeal and scrupulosity. He has no time for that. He goes right to the heart because he sees what is really going on.

When Jesus asks questions of Mary or concerning Mary––questions like “Did you not know I must be in my Father’s house?” (Luke 2:49), “Who is my mother?” (Matthew 12:48), and “How does your concern affect me?” (John 2:4)––he is not unveiling some duplicity in her as he was with the scribes and Pharisees. Rather, he is provoking her agency. She, who is immaculate, perpetually gives her will over to God’s providence. Rather than recede into passivity, she moves into ever greater activity. She who received her Son at the word of the angel now receives him more deeply in his Father’s house. She who is his Mother by birth is also his Mother by faith. She who has allowed herself to be wholly affected by Jesus deigns to allow her own concern to affect him. Just as the Lord is not looking for duplicitous performers, he is also not looking for spineless followers. He wants the hidden life to become visible so that those who hear his voice will follow him with their whole heart. And that means being honest with him, even laying your concerns on him as if he himself will be moved by what we care about.

It is easy to make Lent into a performance. Jesus has no time for that. When he questions us, he questions our desire to make a performance out of our motives and intentions. The first step to following him is always the step of humility, of reckoning with the fact that there is no hiding from his gaze. Only beginning from there will he lead us to reckoning with him as partners in the new life he brings.